Explore Book Buy On Amazon
Human birth is a commonplace miracle: from a single infinitesimal cell to a human baby in less than ten months. The following sections give a brief overview of how it happens. 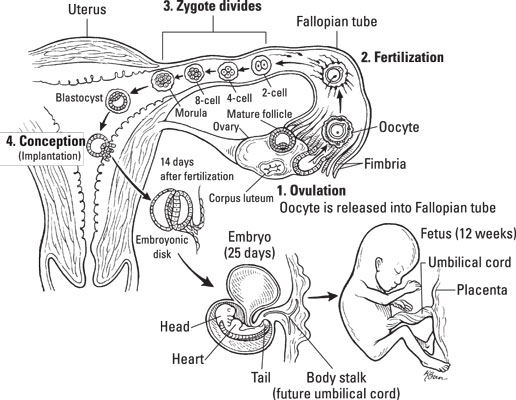 Fertilization, which takes about a day, begins when a sperm penetrates a secondary oocyte (an egg). After a sperm binds with the receptors in the zona pellucida, it uses enzymes in its acrosome to digest the egg's protective layer. When the sperm has finally reached the cell membrane of the oocyte, it attaches to receptors there. This triggers two important events:

The zygote undergoes cleavage (mitotic division) immediately. Over the next few days, the daughter cells (called blastomeres) divide twice more, to a total of 16 blastomeres, all within the rigid wall of the zona pellucida with no increase in overall size.

The mass, now called a morula (mulberry-shaped), leaves the uterine tube and enters the uterine cavity. Cell division continues, still confined within the zona pellucida, and a cavity known as a blastocoel forms in the morula's center. Around the sixth day after fertilization, the hollow structure, now called a blastocyst, "hatches" from the slowly eroded zona pellucida within the uterine cavity. The outer layer of blastocyst cells secretes an enzyme that facilitates implantation in the endometrium. Angiogenesis (building of blood vessels) begins in the uterus, and diffusion between mother and blastocyst begins. When this diffusion is established, implantation is complete and the pregnancy is established.

The new genome has survived a very dangerous stage of development. Biologists estimate that up to one-half of blastocysts fail to implant, and they die. But the new genome still has challenges ahead.

Weeks three through eight after implantation are called the embryonic stage. During these weeks, the embryo's cells begin to differentiate and specialize.

The transition from blastocyst to embryo begins when the implanted blastocyst develops into a two-layer disc. The top layer of cells (epiblast) becomes the embryo and amniotic cavity; the lower layer of cells (hypoblast) becomes the yolk sac that nourishes the embryo. A narrow line of cells on the epiblast, called the primitive streak, signals gastrulation — cells migrate from the epiblast's outer edges into the primitive streak and downward, creating a new, middle layer. By 14 days or so after fertilization, the embryo, now called a gastrula, has ectoderm, mesoderm, and endoderm layers — the very beginning of tissue formation.

Following week eight and lasting until birth is the fetal stage. Growth and development occur rapidly during this time. The primary germ layers continue their development as the fetus becomes more recognizable as a baby. The ectoderm develops into the skin and nervous tissues, while the endoderm forms your inner tubes — the alimentary canal and the respiratory tract. The mesoderm develops into everything in between, including the bones and muscles.

Immediately after implantation, the blastocyst initiates the formation of the placenta, a special organ that exists only during pregnancy that's made of the mother's cells in the outer layers and the fetus's cells in the inner layer. The placenta serves to support the sharing of physiological functions between the mother and the fetus: nourishment (provision of energy and nutrients), gas exchange (a fetus must take in oxygen and eliminate carbon dioxide before birth), and the elimination of metabolic waste. The placenta allows some substances to enter the fetal body and blocks others. It does a good job of delivering nutrients and maintaining fluid balance, but it's permeable to alcohol, many drugs, and some toxic substances.

The placenta is a dark red disc of tissue about 9 inches (23 centimeters) in diameter and 1 inch (2.5 centimeters) thick in the center, and it weighs about a pound (roughly half a kilogram). It connects to the fetus by an umbilical cord of approximately 22 to 24 inches (56 to 61 centimeters) in length that contains two arteries and one vein. The placenta grows along with the fetus.

Both the fetus and the placenta are enclosed within the amniotic sac, a double-membrane structure filled with a fluid matrix called amniotic fluid. The fluid keeps the temperature constant for the developing fetus, allows for movement, and absorbs the shock from the mother's movements.