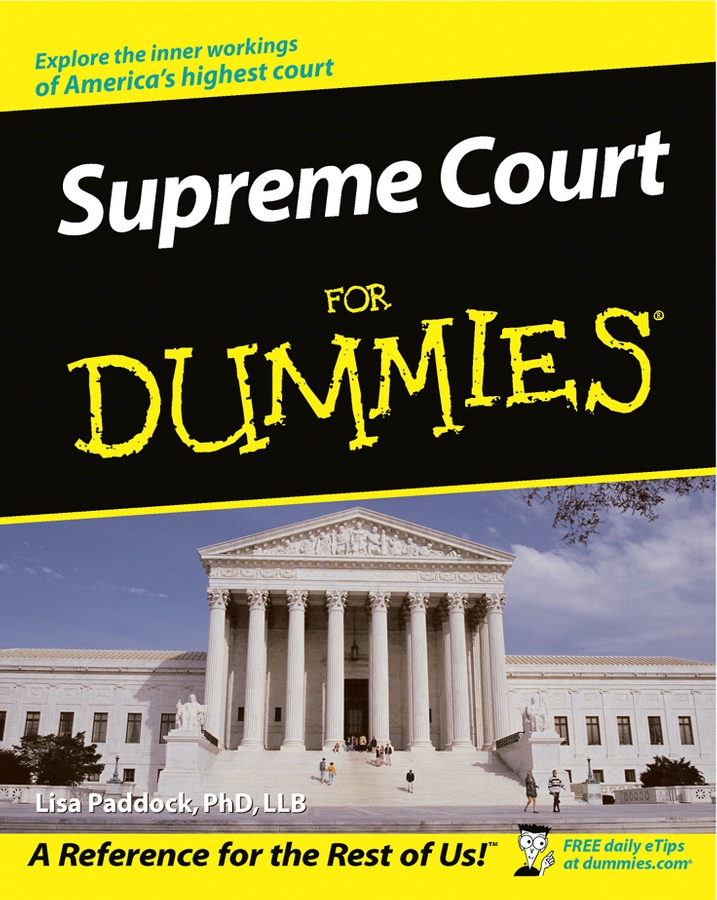 Perhaps no event better illustrates the power of the United States Supreme Court than the resolution of the 2000 presidential election. Just when you thought the separation of powers issue had been settled once and for all, the Court stepped in to adjudicate who had won the biggest political contest of all. Legions of Court watchers, law professors, media commentators, and armchair legal analysts across the country thought the Court's willingness to step into the fray was a major misstep. Still, somebody had to decide who's in charge!

Election night 2000 was a cliffhanger that went on for weeks. Many people went to bed that night thinking that Al Gore had won, only to discover in the morning that George W. Bush had been declared the winner. In fact, the election was simply too close to call. Several states were up for grabs, but in the end it came down to one: Florida, where Bush's younger brother, Jeb, was governor. Florida electors were unable to commit themselves to either Bush or Gore owing to the closeness of the vote. Brush fires erupted in several precincts where the candidates' surrogates traded allegations about various improprieties. Recounts were started, then stopped as Republicans and Democrats wrangled over what standards to apply. It was more than a little chaotic.

The Court steps in

The Supreme Court actually interposed itself into the election contest three times. Only the last two are known as Bush v. Gore. In the first of these cases, Bush v. Palm Beach County Canvassing Board, the Court hoped to end the election crisis by putting a stop to the Florida Supreme Court's decision to extend the time for certifying the vote past the period set by state law. But by the time the Court began hearing arguments in the appeal on December 1, the certification had already occurred. The embarrassed justices sent the case back down to the Florida Supreme Court, instructing the lower court to rewrite its opinion so that it would not create a conflict between state and federal law.

The Court's third and final intervention in the 2000 presidential election came just days later. In its unsigned opinion, the Court explained that it had voted 5-4 to put a stop to the Florida recount. Allowing the recount to go forward, the Court said, would violate the Equal Protection Clause of the Fourteenth Amendment. The U.S. Supreme Court sent the case back down to the Florida Supreme Court, which had no alternative but to dismiss it. The presidential election of 2000 had been decided, in essence, by the vote of one Supreme Court justice.

Needless to say, the George W. Bush camp was jubilant. Al Gore supporters were incensed. Many people were simply happy to have things settled. But others worried that the Court had gone too far. In the past, in landmark cases like Brown v. Board of Education (1954), which put an end to legal segregation, and United States v. Nixon (1974), which led to the first presidential resignation under threat of impeachment, were unanimously decided. After Bush v. Gore, the concern was that the Court had not only overreached itself but undermined its authority by not speaking with one voice. That split decision, 5-4, suggested that Bush v. Gore was a political, not a judicial, decision.

Bush v. Gore wasn't the Court's first foray into the realm of king making. The election of 1876 pitted Samuel J. Tilden, the Democratic governor of New York, against Rutherford B. Hayes, the Republican governor of Ohio. After the votes had been counted, it seemed that Tilden had won the popular vote and had 184 uncontested electoral votes to Hayes's 165. The magic number was 185 electoral votes. Twenty votes of the Electoral College were still up for grabs, however — all but one of them in the southern states of Florida, Louisiana, and South Carolina. (The exception was Oregon. They always have marched to a different drummer.)

The Twelfth Amendment stipulates that in a contested presidential election, "The President of the Senate shall, in the presence of the Senate and the House of Representatives, open all the certificates and the votes shall then be counted." Because in 1876 Congress was equally divided between Democrats and Republicans, the Republican-controlled Senate and the Democrat-controlled House set up an electoral commission to decide who would become president. The Senate chose three Republicans and two Democrats to sit on the commission, and the House chose two Democrats and three Republicans. The remainder of the commission was to consist of five justices of the Supreme Court. The bill setting up the commission named two Republican justices and two Democratic justices, but let those four select their own nonpartisan tiebreaker.

The only truly neutral member of the Court at the time was David Davis. But Davis resigned from the Court almost immediately, leaving only Republican justices as alternatives. Joseph Bradley, seemingly the least partisan of those remaining, was selected as the final member of the commission. To no one's great surprise, the commission voted along party lines, selecting the Republican Hayes. Democrats, who were mostly Southerners, cried foul, claiming that Davis, and perhaps Bradley, had been subjected to political blackmail. When the uproar threatened to derail the orderly transfer of power, a deal was struck. The Republicans agreed to withdraw the federal troops still occupying the South in the wake of the Civil War, to appropriate funds for Southern improvement, and to appoint at least one Southerner to the cabinet. In return, the Democrats agreed not to delay Hayes's inauguration. It was a flat-out political deal, and ever since its implementation, the Court has been criticized for having played a part in what many saw as outright log rolling.

Why, then, did the Supreme Court agree to get back into the fray after the election of 2000? In a sense, the justices had no choice. When the contest between George W. Bush and Al Gore proved too close to call, the contestants resorted to a series of lawsuits in an effort to settle the matter. These suits proceeded simultaneously in the state court system and in federal court. The cases largely concerned the matter and manner of vote counting (and recounting) in the pivotal state of Florida. There were charges of voter intimidation, ballot rigging — all manner of political shenanigans. Something had to be done.