Logging Your Shots in Digital Filmmaking

During a film shoot, you’ll be capturing a lot of footage. Because your actors made some mistakes or because you wanted to take a few extra shots for safety, you may end up with several versions of the same angle or shot. During editing, these shots will look similar, which makes it hard to know which shot was the one you liked the best.

For this reason, you can make notes about each shot captured on a shot log sheet, which makes editing much easier and ensures you don’t miss the best take from each angle.

A shot log can be completed by an assistant director or by the director if you have a small crew. Ideally, the shot log will be the sole responsibility of one person during the shoot. Not using a shot log sheet makes editing very difficult if you don’t edit the film straightaway, because you’re likely to forget which shots were the best.

Some shot log sheets can get very complicated, especially for big‐budget films, because they record information about the footage, including details of timecode, type of lens, focus, and filters, which isn’t always needed for smaller productions. The following list includes useful information for you to note on your shot log sheet when filming: 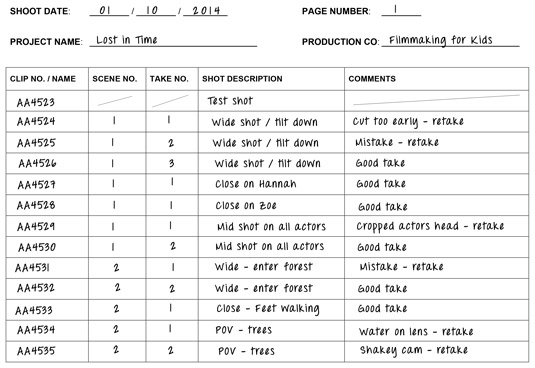 Shot logs can be handy tools. Don’t forget to use one.