How to Structure Your Film Trailer

Film trailers are created to show the audience what the film is about and to encourage them to want to see it when it’s released. It’s important to not show too much of the storyline; otherwise people won’t want to see the finished film — they’ll already know what happens from the trailer! The following list describes a few things you may wish to include in your trailer.

Have a look through some trailers online to see how other directors do it. It’s a good idea to watch a trailer from a film you’ve already watched to see how its trailer explains the story without giving too much away.

Here is structure sheet that a film crew created for their film showing some of the key moments they want to include in their trailer. 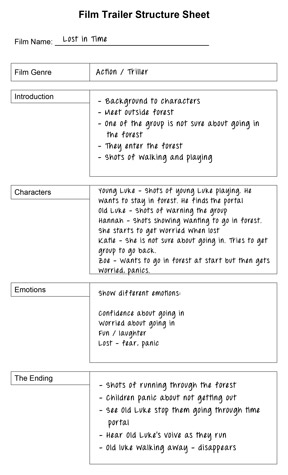 A structure sheet can help you plan your trailer.