How to Run Auditions for Your Digital Film

Let’s say you have a queue of people fighting over the main part in your digital film, and you’re wondering whom you should choose. Well, running auditions is the answer. Auditions are a great way to give your potential cast the opportunity to show how good they are and why they deserve a part in your film. 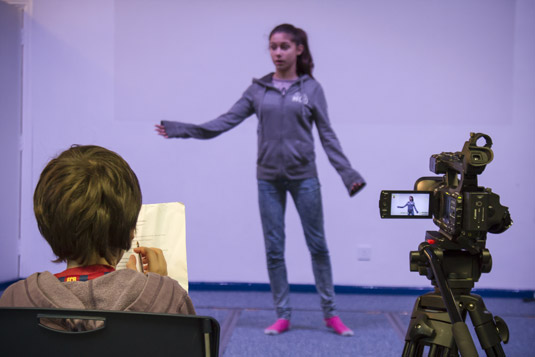 Find good actors for your film through auditions.

You may want to ask someone else to run the auditions with you. This allows you to discuss each audition with another person and gives you someone to help you make your decision. It can also useful to film the audition: You can watch it again later and remind yourself how well each audition went.

Auditions can be quite stressful, so they’re also a good way to see how an actor works under pressure. This can give you an idea of how the actor will behave in front of a camera. After all, even the most confident people can go shy when a camera is pointed at them.

The following list describes some things to look for in the actors you meet when running auditions:

When organizing your audition, make sure as many people as possible know about it so plenty of people turn up. Put an ad in the local newspaper or post one to Craigslist. Create a poster to put up at your school or send text messages to your friends or any other people you think might be interested. Be sure you include the date, time, and location of the audition, along with details about the film and any relevant information about the characters you’re auditioning for.

Ask the actors to prepare a monologue to perform at the audition. This could be a short play or sketch they can perform on their own. Alternatively, send them a script to learn. The script should be only a few minutes long: You want to see how well the actor performs a character, not how well he or she learns a script.

When looking for actors for your film, sometimes it’s worth asking any drama students in your school or drama students from local colleges if they’d like to be involved. For serious students, any work they get is valuable experience — and another film they can add to their portfolio.