Your choice whether to use a fixed camera position or a moving camera for your digital film depends on the feel, mood, and emotion you want to create in the shot. It’s amazing what a small amount of movement from the camera can do to a shot.

The art of film is wonderful because you can use all these different types of shots within a scene. An audience in a theater can only watch a stage performance from one angle, usually from a position too far away to read the actors’ facial expressions. (This is why stage actors use big actions and gestures.)

With film, however, you can combine any number of shots — start with a wide shot, move in to a mid shot for the dialogue, and then zoom in for a close-up shot — to show even the most subtle expressions and emotions.

Steady does it! Using a tripod

A tripod is a great tool for keeping your shots steady and for taking the weight of the camera off of your camera operator. It’s also great for adding subtle or gentle movement to your shots. 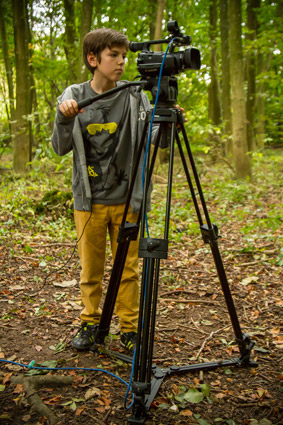 Steady your shot with a tripod.

Filming a whole movie with a handheld camera can be uncomfortable for the camera operator, so before you choose this approach, be sure that it matches the style and mood of your film. Some films have used the handheld camera technique throughout, but that style was used to add a tense, scary, or point‐of‐view feel to the shots.

Shooting some shots on a tripod and some handheld can change the mood and feeling through the scenes. With a tripod, you can also add movement to your shots to make them more interesting, as follows:

By simply holding the camera to film your scenes, you can add drama and emotion to your shots. This means that your footage can look more interesting and a bit more exciting.

When using the handheld technique, it’s important to hold the camera with both hands when filming. This supports the camera and reduces some of the shaking from your hands. Don’t worry, the shots will still look dramatic. When filming handheld shots, you may want to place one hand in the camera’s hand strap and one underneath the camera. 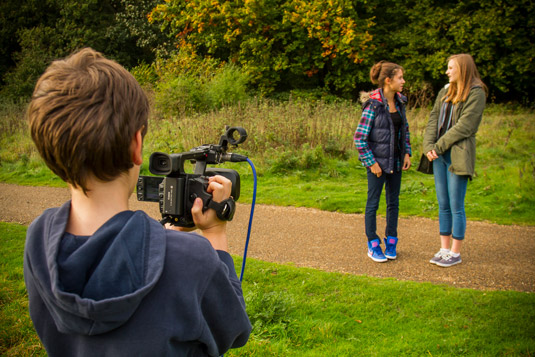 Shooting with a handheld camera can add effect.

If you’re filming a high action scene or if you want to add energy to your shots, you may want to shoot handheld. Handheld shots are used often in chase scenes and fight scenes to make the scene look more chaotic and realistic and to grab the attention of the audience. It can also make the audience feel as if they are looking through the eyes of your character. Such shots are called point-of-view (POV) shots.

A camera stabilizer combines the look and feel of handheld and tripod shots and creates beautifully smooth shots. The original camera stabilizer, the Steadicam, was invented by a camera operator called Garrett Brown and was first introduced in 1975. Camera stabilizers are great for following actors or subjects through a scene without having to cut and change angle or move the tripod.

The shots from a camera stabilizer are so smooth that it gives the impression that the camera is flying. The shots within films that use camera stabilizers to shoot long, sweeping, and continuous shots look amazing.

Steadicams can be expensive to buy, but alternative versions for smaller cameras are available at camera stores from around $25. Or check out the YouTube videos that show you how to make your own camera stabilizer.