One Irish style that works well on the fiddle is called the Irish hornpipe. This style incorporates a swing-type rhythm. The Irish hornpipe is typically in 4/4 time and has a lot of grace notes and triplet runs.

In the second line, you see the literal rhythm that should be played when swinging eighth notes. This will sound the same as the first line. The second line can be explained as a pair of eighth notes played with a triplet feel created by tying the first two notes of the triplet and playing the 3rd note.

By seeing eighth notes in a hornpipe, you can generally assume the notes are played in a swing rhythm. You won’t see it written out like you see here.

It is possible to see the swing pattern illustrated as a dotted eighth note followed by a 16th note, but the swing feel is more subtle than that.

Listen to a swing rhythm in eighth notes on the fiddle. Both lines will sound exactly the same.

“The Derry Hornpipe,” is an example of an Irish hornpipe. It includes suggestions for the Irish roll. 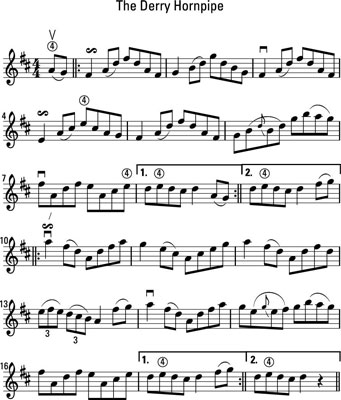 Measures 6 and 15 incorporate what in Irish music is called the cut-grace note. This is simply a grace note that cuts the pitch between two notes of the same pitch. Without this grace note, the notes would tie together and not sound like two different pitches.

In measures 1, 4, and 10, there’s a little symbol above each note called an Irish roll. The Irish roll is a unique ornamentation that’s very common in Irish melodies. This symbol creates extra notes played very fast around the target note. Take a look at what finger pattern you’ll play based on the finger number that you see the roll over.