How to Play Double-Stops on the Fiddle

Double-stops are when you play two notes at once on the fiddle, but you play both of the notes with a finger down. You can also call double-stops chords. As you’ve found with the fiddle, it isn’t always easy to put your finger down in the right spot, but now with double-stops, you have to do two down at the same time. Sounds fun, doesn’t it?

When you put a finger down on one string, and play it along with an open string, this is considered a drone. Drones are easier to play than double-stops because you don’t have to get the accuracy of two finger placements proper.

If you’re a beginner player, you can always choose not to play a double-stop and instead play just the top note. This is the easy way out, but it’s definitely what you should do if you don’t feel comfortable playing the double-stop yet. Adding in the double-stop, though, gives your tone a fuller sound.

As you can see, the first measure has two notes on top of each other. This means that you play both notes at the same time. Do you see where the black dot is on each of the lines? This shows you which notes should be played at the same time.

The first measure has all fiddle drones; one of the notes is played with an open string. The second measure has all double-stops; you need to put two fingers down at once.

If you’re struggling to get a similar sound to this double-stop line on the fiddle, it’s almost always because of bad technique. You could be doing any of the following things, which may be causing the bad sound:

Watch the fiddle creating clear double-stops to fully understand these points and how to get the best possible sounds out of your double-stops.

Getting proper contact with the bow is the most important thing to create a clear sound with double-stops and drones. It’s easy to try to force the sound of the double-stop by gripping harder or applying your big muscles into the stroke instead of the small muscles.

It’s especially important to have your fingers in the correct spots when playing a double-stop compared to just a single note. The reason for this is that if one of the notes is off, you’ll hear a clash of sound between both notes that sounds very unmusical.

You can change a fiddle tune each time you play it. With this in mind, understand that you can add or subtract double-stops in fiddle pieces whenever it fits your mood.

Listen to the simplicity of “Galesburg Tune.”

Playing this musical line shouldn’t be too hard for you. (If it is, don’t continue on until you’ve mastered it!) Listen to “Galesburg Tune” with some double-stops and drones added to it.

One thing you may want to try, which is a level above simply doing a double-stop, is to slide into the double-stop. This is considered an advanced concept, so if you’re more of an intermediate player, sliding into a double-stop may be difficult for you to accomplish (especially sliding into the notes in tune).

Start first with just trying to play the double-stops without sliding before trying to apply a slide into them. You can technically slide both notes or just one.

Check out the tune “Cacklin’ Hen” which has some suggested double-stops.

Try to replace some of the suggestions in the piece with some of your own. 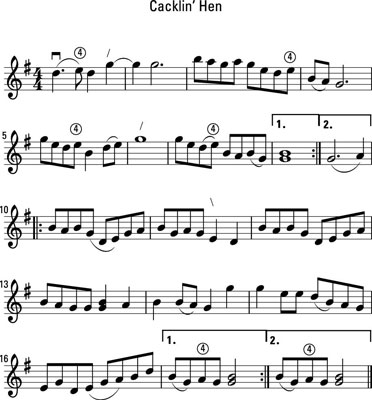