How to Play Accents in Irish Music on the Fiddle

Fiddles are a great instrument for accenting. In music, an accent is an emphasized note, which, in Irish music, is located in spots that you try to emphasize to create a unique sound. The accent symbol looks like a sideways up-bow symbol: >.

To create the accent sound, you want to pull the bow farther than you normally do while still maintaining a clean sound. Here, you see a set of accented eighth notes; follow these steps to play them.

If you’re having trouble envisioning how this works, think about what you would do in a tug-of-war match when you’re first allowed to tug the rope. That initial energy you put into the first tug is sort of what you do in the beginning of the accented note.

Anytime you have to pull the bow faster, it’s natural to want to grab on for dear life. You may feel comfortable using your shoulder or gripping harder to tug the bow. The key is to use only your index finger and have all your other muscles relaxed. This is a little different from the muscles you’d use in a tug-of-war match!

The amount of bow you use on an accent varies widely depending on the speed of the note and the speed at which you’re playing a certain song. You really can’t stick to a particular amount of bow because of these variables. Just remember when you have an accent to tug the bow farther than you normally would. The goal is to create a different sound from the way you’d normally play the note.

Now try to do this accenting pattern, which accents beats 1 and 4. These are the typical spots you want to accent in Irish music. Play the other eighth notes that aren’t accented with a smaller bow than normal. This isn’t the same as loud versus soft — you just use very little bow for the other eighth notes to make the accented notes sound more Irish.

If you normally use about half the bow for a regular eighth note, use much less in this case. You aren’t trying to play the notes softer — just less emphasized. The key is for the accented notes to stick out.

Using very little bow for beats 2, 3, 5, and 6 requires controlling the speed of the bow with your index finger. Here’s an example of what you should be thinking:

Watch here to make sure you’re doing the Irish accent technique on the fiddle properly.

Remember everything you had to learn when you first started the fiddle? All the techniques seemed very difficult at the time because they were brand-new concepts. Now that you’re adding in new techniques like accents, it’s important that you review the fundamentals. You create a clean sound by using the index finger, which is also what you should use to move the bow with accents.

Now it’s time to put your accent ability to the test! Take a look at the first measure of “Swallowtail Jig.” You can do this pattern in any measure that follows, as it creates a dancing feel. 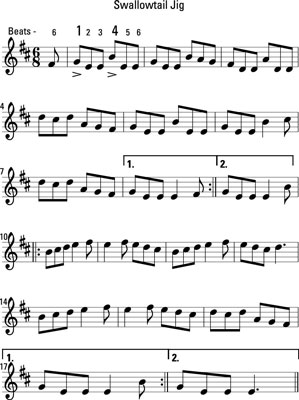 Accents are considered ornamentation, meaning they can be added to a jig to flavor the song. If you’re used to classical violin, every element of music is included in a piece, including where you should accent.

In Irish fiddle, however, these symbols aren’t always placed because it’s left up to musicians to put in accents where they feel the accents best fit their style. Anytime you see an Irish jig in 6/8 time, you can add accents, and beats 1 and 4 are the best places to put them.