Playing Swing and Shuffle Time on the Piano

The beat may go on and on, but piano music can be quite dull if every note you play is on the beat. By changing up the rhythm a bit and playing some notes off, around, or in between the main beats, your songs take on a whole new life.

Ultimately, the best way to understand swing is to hear it.

Listen to a sample of swing while you look at the four measures of music. The eighth notes are played with a swing feel; the notes are the same, but the rhythm has a slightly different, swingin’ feel. 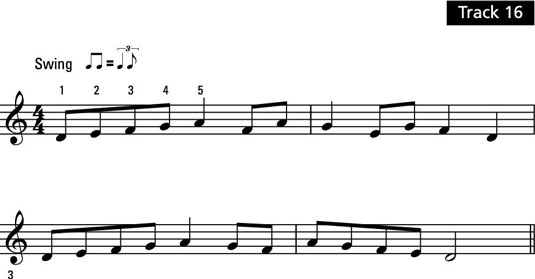 Instead of straight eighth notes played as “1-and, 2-and,” you hear a long-short, long-short rhythm. The most accurate way to notate this long-short rhythm is with a quarter-eighth triplet. But rather than write a ton of triplets, the composer gives you a big heads-up along with the tempo indication above the first measure by telling you to “swing,” either in plain English or with a little symbol.

When you see the swing notation, you should play all the eighth notes in the music as swing eighths. You can still count them as “1-and, 2-and, 3-and, 4-and,” but the notes on the beats are longer and the notes off the beats are shorter.

Swing, the classic rhythmic feel, is so popular that it has its own type of bands and dance moves. Listen to some of the music of the big-band era, like the Duke Ellington Orchestra or the Tommy Dorsey Orchestra. They really had the whole world swingin’.

You can also hear an example of swing-style eighth notes. Listen to “By the Light of the Silvery Moon.”

Shuffle feel has the same long-short swing eighths as swing time, but the shuffle beat is more readily associated with rock and blues-style music. A shuffle feel is characterized by a heavier beat than swing, which is lighter on its feet.

Listen to “I’ve Been Working on the Railroad,” a song with a shuffle feel.