How to Play Jazz on the Piano

If there’s one particular music style that embraces all that the piano can do, it’s jazz. Celebrated by many as America’s greatest art form, jazz is king when it comes to interesting chord harmonies, changing rhythms, and improvisation. Legendary jazz pianists like Thelonious Monk, Bill Evans, Art Tatum, Bud Powell, and many others have taken these elements and added them to classic songs to make them jazzier.

The great jazz pianists use tried-and-true musical tricks to freshen things up. Borrow these tricks yourself:

It’s up to you

It’s time to be creative. Improvisation is perhaps the most important element of jazz music. It can be literal improvisation, where you (the performer) make up your own rhythms and riffs, or implied improvisation, where the music is originally written in a way that just sounds as if it were composed spontaneously.

The easiest way to improvise is by changing the rhythm of a melody. For example, take the simple quarter-note melody of “Yankee Doodle” and transform it into a swingin’ jazz tune by adding swing eighth notes, syncopation, and a well-placed rest now and then to keep things cool. 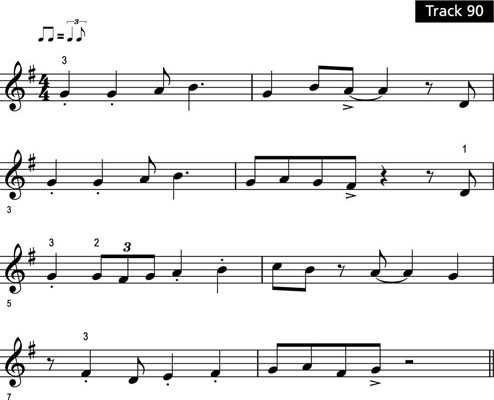 See a performance of “Yankee Doodle” as a swingin’ jazz tune.

Few jazz compositions use the standard major and minor chords throughout. In fact, few jazz pianists play the original chords written in a song. Instead, they break the rules and substitute new chords to liven up otherwise simple melodies.

Here is the well-known children’s song “Merrily We Roll Along.” As you play it, notice the simple chord progression of C-G7-C.

Even “Merrily We Roll Along” can sound not-so-childish with the use of chord substitution. The idea is to find a more interesting chord progression from I to V7 to I. Try the following options: