How to Observe Rests in Piano Playing

No matter how much you enjoy something, you can’t do it forever. Most composers know this and allow piano players and other musicians places in the music to rest. It may be resting the hands or simply resting the ears, but rest is an inevitable and essential part of every piece of music.

A musical rest is simply a defined period of time in the flow of music when you don’t play or hold a note — you play nothing. When you’re under a rest, you have the right to remain silent. The beat goes on — remember, it’s a constant pulse — but you pause in your playing.

The rest can be as short as the length of one sixteenth note or as long as several measures. However, a rest usually isn’t long enough to order a pizza or do anything else very useful.

Whole and half rests

When you see a whole note F, you play F and hold it for four beats. For a half note, you play and hold the note for two beats. A whole rest and half rest ask you to not play anything for the corresponding number of beats.

They look like little hats — one off (whole rest) and one on (half rest). This hat analogy and the rules of etiquette make for a good way to remember these rests. Check it out:

These rests always hang in the same positions on both staves, making it easy for you to spot them in the music. A whole rest hangs from the fourth line up, and a half rest sits on the middle line.

In the first measure, you play the two A quarter notes (use your third finger) on beats 1 and 2, and then the half rest tells you not to play anything for beats 3 and 4. In the second measure, the whole rest tells you that you’re off duty — you rest for four beats.

In the third measure, you put down your donut and play two G quarter notes (second finger) and rest for two beats. Finally, the whole show ends in the fourth measure with a whole note A.

In addition to whole and half rests, composers use rests to tell you to stop playing for the equivalent of quarter notes, eighth notes, and sixteenth notes. 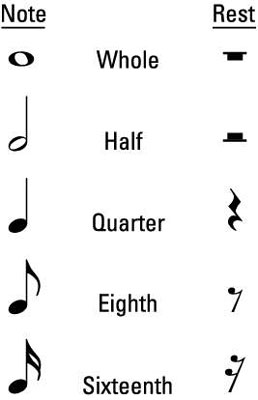 The eighth rest and sixteenth rest are easy to recognize: They have the same number of flags — although slightly different in fashion — as their note counterparts. An eighth note and eighth rest each have one flag. Sixteenth notes and rests have two flags.

Count all rests just like you count their kindred notes. Quarter rests are easy to count because they last only one beat. Eighth and sixteenth rests can be a bit harder to count simply because they happen faster. Don’t be afraid to count out loud; doing so helps you place the eighth rests more precisely and may even cause others to sing along.

Check this out to hear the rests incorporated into the music.

You read sixteenth-note rests when you get into more advanced music. Until then, just remember what they look like.