Anatomy of a Mandolin

Explore Book Buy On Amazon
Mandolins come in many shapes and sizes but share enough anatomical similarities to be considered mandolins. Here, we look at a modern F5-style mandolin because it’s the most popular mandolin around today.

The F5 has some cosmetic features that other models don’t have, making it more decorative. Check out the photo to see the full anatomy of the mandolin. 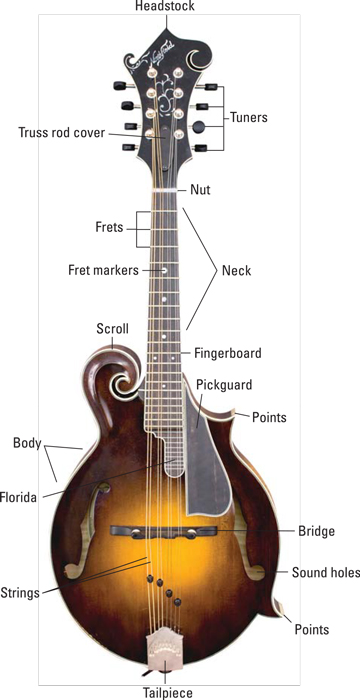 Mandolin strings are made of steel and come in sets of eight.

The soundholes in the top allow the sound to come out (not surprisingly). Mandolins come with two different types of soundholes:

The bridge is the wooden piece that sits approximately in the middle of the body and functions as a guide to line up the strings and transfer vibrations from the string to the top. The bridge is only held on with string pressure.

If you take off all the strings, the bridge falls off.

The tailpiece is a stamped or cast piece of metal that serves as a place to anchor or attach the strings. It’s attached to the side of the mandolin body and, unlike the bridge, doesn’t fall off when you are changing strings. Tailpieces are functional but they can also be decorative.

Not all mandolins have scrolls. In general, if the mandolin has a scroll, the model begins with the letter F, as in F5- or F4-model mandolins. Musicians and manufacturers may argue over whether the scroll makes any sound difference, but what’s clear is that these models are harder to build and so more expensive.

Points are another cosmetic appointment that not all mandolins have. The typical F5 mandolin has two points coming off the bottom of the body. The bottom points are handy to rest on your leg when you are playing while seated, to keep the instrument from moving. Some mandolins have two points: one where the scroll would be and one opposite that location.

A pick guard (sometimes called a finger rest) is a protective piece made of wood or plastic that can serve as a place to rest your third and fourth fingers as a reference guide or to keep the mandolin from getting scratched up.

Not all mandolins have pick guards, and some people (including myself) remove them to allow more sound to come out of the soundhole.

The neck is the long, slender part attached to the body and runs parallel to the strings. Your left hand is going to spend a lot of time on the neck, and so get familiar with the different parts, described below.

The fingerboard, or fretboard, is a thin piece of hardwood with very precise grooves or channels cut in it, into which the frets (see the next section) are hammered or pressed. The fingerboard is glued to the neck.

Frets are the strips of metal that are vertical on the fingerboard. In effect, these metal strips shorten the length of the string when you hold them down with your finger, adjusting the pitch of the string. As you fret closer to the mandolin’s body, the pitches or notes get higher. Each of these pitches has a letter name, and together the letters make up the musical alphabet.

The fret markers are little pearl dots placed in the fingerboard at frets 5, 7, 10 and 12. Often, these markers are also placed on the side of the neck facing up, so the player can see the dots too.

If you’re coming to mandolin from playing guitar, the fret markers are a little different. The guitar fingerboard is marked at the ninth instead of the tenth fret.

A Florida is the fingerboard extension, named because of its resemblance to the shape of the state of Florida. The extra frets it provides were added to the mandolin to give the player access to notes that are even higher, as if the mandolin notes aren’t high enough already. Very few mandolin players ever play these notes.

The headstock is the piece at the end of the neck that supplies a place to fasten the tuners. The mandolin maker usually puts the brand name on the headstock.

The nut is the slotted piece located at the end of the fingerboard that acts as a guide for the strings. They pass over the nut on the way to the tuners.

Since you asked, the tuners are the gear-driven pegs to which the strings are attached. The tuning of each string is achieved by turning the knob on the end of each tuner.

The truss-rod cover is a plate mounted on the headstock that’s removed when you want to adjust the truss rod. The truss rod itself is a steel rod that runs the length of the mandolin’s neck, which you can use to straighten a bowed neck. Not all mandolins have this feature.

When the mandolin is strung and tuned up, the strings create a downward pressure on the top. When you pluck the strings, they vibrate at specific pitches, transferring these vibrations to the top. In turn the top vibrates, turning the vibrations into sound.