By: Winslow Yerxa and
Updated: 03-26-2016
From The Book: Blues Harmonica For Dummies 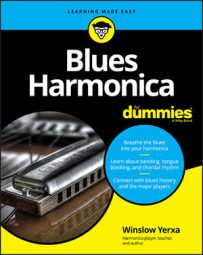 Along with its cousins, the accordion and the concertina, the harmonica got its start around 1820 in the German-speaking parts of Europe. Right from the beginning, harmonicas were called mouth harps (or mundharfe in German). No one knows for certain who invented the harmonica.

At first, harmonicas were made by hand by part-time workers in semirural areas of Germany. The Hohner company, which later grew to dominate the world harmonica market, made only 650 instruments in 1857, its first year of production.

By the mid-1870s, mechanization allowed Hohner alone to produce more than 50,000 instruments yearly. By 1900, Hohner was pumping out more than 3 million harmonicas a year, with most going to the United States. Meanwhile, mail-order catalogs helped distribute harmonicas to even the loneliest outposts.

By the mid-1880s, Midwestern music publishers were producing harmonica instruction books, attesting to the harmonica’s growing popularity. The books made no mention of such blues techniques as bending notes or playing the harmonica in a key different from its labeled key.

During the 1920s, several harmonica players made records that give a picture of the earliest blues harmonica styles. Those recordings reveal some interesting facts:

Traveling life and the migration north

In the South, black musicians gravitated to towns that offered relaxed racial attitudes, nightclubs for gigging, and radio exposure. The next step for the itinerant performer was one of the larger southern population centers, especially the so-called wide open towns where illegal Prohibition-era whiskey and Depression-era money both flowed freely under corrupt civic governments.

The biggest population magnets, though, were the northern and western cities that offered steady industrial jobs at wages much higher than could be found doing seasonal farm labor in the South. Later on, during the 1940s, the wartime shipbuilding industries in Los Angeles and the San Francisco area attracted a large influx of southern black folks, leading eventually to the West Coast blues styles.

In Memphis, Beale Street was the center of musical activity, and blues musicians there developed a ragtime-influenced style called jug band, named for the large whiskey jugs that players blew into to create trombone-like bass lines. Banjo, guitar, harmonica, and hokum lyrics with a jaunty air were typical of jug band music.

Before about 1947, two very different approaches to blues were heard:

The rise of amplified blues harmonica

Beginning sometime in the late 1940s, harmonica players started using amplification in a new way. With a small, portable amplifier and a cheap microphone, they would cup the mic in their hands, together with the harmonica, to create a highly concentrated sound that was loud enough to project over the din on street corners and in small nightclubs.

By the start of the 1950s, electric guitars and amplified harmonicas were the rule in Chicago blues bands, backed by drums, bass, and piano.

Here are some hallmarks of this style:

Small, independent record companies have long been important vehicles for blues artists to get their music to consumers. Some of the better-known regional companies highlighted blues harmonica and promoted early rock-and-roll. This combination later influenced the adoption of the harmonica by rock artists in the 1960s, who heard blues harmonica alongside the latest hits.

By the late 1950s, white teenagers were obsessed with rock-and-roll, while black audiences had largely moved on from the blues. The folk music movement of the 1950s presented Americans with an alternative to current popular music. Folk fans began to see blues musicians as a part of the folk movement, with several effects:

Musicians worldwide have been bitten by the blues harp bug, and the virus often mutates and starts to interact with its new host. Artists and the stylistic crossbreeding they’ve been working between blues and other styles include jump and swing's Dennis Gruenling, beatboxing's Son of Dave, and soul's Bobby Rush.