Mapping Out Up-the-Neck Chords on the Bluegrass Banjo

Whether you’re picking lead or playing backup bluegrass banjo, the first step to playing up the neck with confidence is to get comfortable fretting the chords you need anywhere on your banjo fingerboard. Here, you find the six movable chord positions you use to play major and minor chords.

A movable chord position is a chord shape that can be shifted up and down the neck to play chords at different frets on the banjo fingerboard. The great thing about movable positions is that you can fret a lot of chords using the same shape. The challenge is that you need to fret four strings — the fourth, third, second, and first strings — to create a chord that can be moved around the fingerboard in this way.

The open strings of your banjo form a G chord. The barre shape transfers this open chord up the neck and is relatively easy to fret: Just place your index finger across the fourth through the first strings to create chords using this shape. When you use a barre shape at the second fret, you’re playing an A chord. 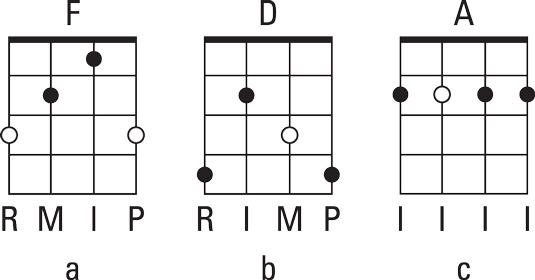 You create new chords by moving these three shapes up and down the fingerboard, being careful to keep the relative positions of each fretting finger the same for each shape. The letter name given to each chord is determined by which shape you’re using and where you’re fretting the chord.

Although you won’t encounter minor chords nearly as often as major chords in bluegrass music, you’ll use minor chords in everything from “Rocky Top” to “Foggy Mountain Breakdown.” Some bluegrass songs, like “Little Sadie,” “Wayfaring Stranger,” and “Jerusalem Ridge,” are in a minor key, and their chord progressions are made up mostly of minor chords.

As with movable major chords, there are three movable minor chord shapes. Here, you see the positions for the F minor, D minor, and A minor chords. You can move each shape up the neck to find all the other minor chords. 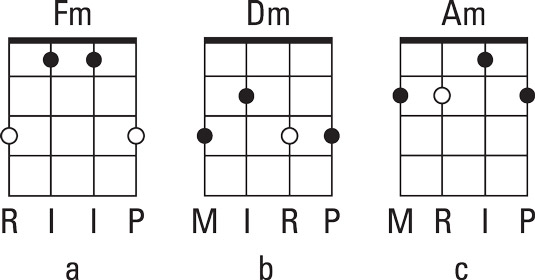 The most efficient way to master these movable positions is to get comfortable with these shapes one at a time, as you encounter them in new songs.

Great bluegrass banjo players seem to move effortlessly from one chord shape to another, using the entire length of the fingerboard to fret the chords they need. How do they accomplish this seemingly impossible feat? The chord progression of the song provides the road map that banjo players follow to determine what to play, and the movable positions are the destination points along the way.

Understanding how chords and movable positions relate to one another in chord progressions will unlock the mysteries of playing up the neck on your banjo.

Many bluegrass songs use only three chords. If you’re playing in the key of G (using a G‐major scale), these chords are G, C, and D or D7. Chord progressions can also be described using numbers that represent the chords built from the notes of the scale of the key of the song.

Bluegrass singers choose a key that best matches their singing range, so it’s important to get comfortable over time playing in a variety of keys on your banjo. Describing chord progressions using numbers (either I, IV, and V or 1, 4, and 5) allows musicians to more quickly figure out how to play chord progressions in different keys; this process is called transposing.

As you transpose a chord progression into a different key, you shift the movable chords up or down the neck the number of frets needed in order to match the new key.

This shows you the I, IV, and V chords in the keys that you’ll most frequently use to play bluegrass songs. This reference will come in handy for when you need to negotiate playing in different keys using the capo at your next jam session.