Use the Law of Cosines for SAS

When you have two sides of a triangle and the angle between them, otherwise known as SAS (side-angle-side), you can use the law of cosines to solve for the other three parts. Consider the triangle ABC where a is 15, c is 20, and angle B is 124 degrees. The following figure shows what this triangle looks like. 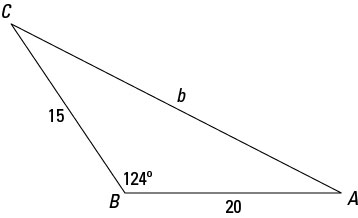 A sample triangle that allows for the law of cosines.

Now, to solve for the measure of the missing side and angles:

You can also switch to the law of sines to solve for this angle. Don’t be afraid to mix and match when solving these triangles.

How about an application that uses this SAS portion of the law of cosines? Consider the situation: A friend wants to build a stadium in the shape of a regular pentagon (five sides, all the same length) that measures 920 feet on each side. How far is the center of the stadium from the corners? The left part of figure shows a picture of the stadium and the segment you’re solving for.

You can divide the pentagon into five isosceles triangles. The base of each triangle is 920 feet, and the two sides are equal, so call them both a. Refer to the right-hand picture in the preceding figure. Use the law of cosines to solve for a, because you can get the angle between those two congruent sides, plus you already know the length of the side opposite that angle.