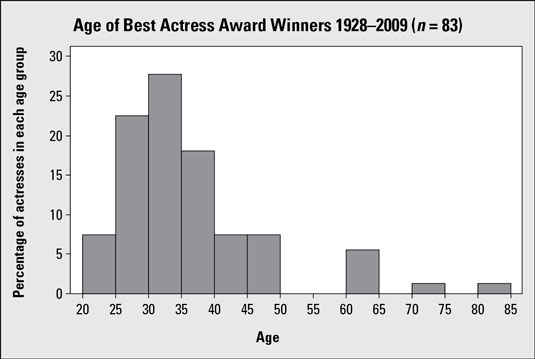 The preceding graph is a histogram showing the ages of winners of the Best Actress Academy Award; you can see it is skewed right. The following table includes calculations of some basic (that is, descriptive) statistics from the data set. Examining these numbers, you find the median age is 33.00 years and the mean age is 35.69 years:

The mean age is higher than the median age because of a few actresses that were quite a bit older than the rest when they won their awards. For example, Jessica Tandy won for her role in Driving Miss Daisy when she was 81, and Katharine Hepburn won the Oscar for On Golden Pond when she was 74. The relationship between the median and mean confirms the skewness (to the right) found in the first graph.

Here are some tips for connecting the shape of a histogram with the mean and median:

If for some reason you don't have a histogram of the data, and you only have the mean and median to go by, you can compare them to each other to get a rough idea as to the shape of the data set.