A pie chart takes categorical data from a statistical sample and breaks them down by group, showing the percentage of individuals that fall into each group. Because a pie chart takes on the shape of a circle, the "slices" that represent each group can easily be compared and contrasted.

Because each individual in the study falls into one and only one category, the sum of all the slices of the pie should be 100% or close to it (subject to a bit of rounding off). However, just in case, keep your eyes open for pie charts whose percentages just don't add up. 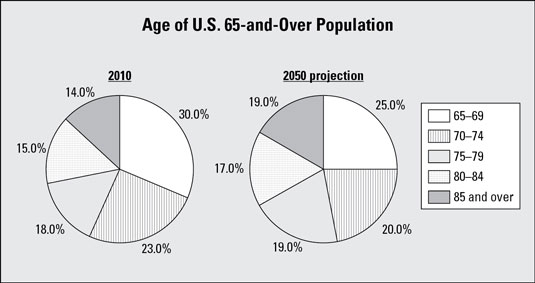 This image shows side-by-side pie charts for the years 2010 versus 2050 (projections) to make comparisons. The percentage of the older population in each age group for 2010 is shown in one pie chart, and alongside it is a pie chart of the projected percentage for each age group for 2050 (based on the current age of the entire U.S. population, birth and death rates, and other variables).

The results from the image indicate a shift in the ages of the population toward the older categories. From there, the medical and social research communities can examine the ramifications of this trend in terms of healthcare, assisted living, social security, and so on.

In this example, the pie charts in the image work well for comparing groups because they are side-by-side on the same graph, using the same coding for the age groups in each, and their slices are in the same order for both as you move clockwise around the graphs. They aren't all scrambled up on each graph so you have to hunt for a certain age group on each graph separately.

The following tips help you taste test a pie chart for statistical correctness: