Working with Trigonometric Ratios on the Coordinate Plane

To put angles on the coordinate plane, essentially all you do is look at the trig ratios in terms of x and y values rather than opposite, adjacent, and hypotenuse. Redefining these ratios to fit the coordinate plane (sometimes called the point-in-the-plane definition) makes visualizing these easier. Some of the angles, for instance, are larger than 180 degrees, but you can make a right triangle by using a point and the x-axis. You then use the new ratios to find missing sides of right triangles and/or trig function values of angles.

When a point (x, y) exists on a coordinate plane, you can calculate all the trig functions of the angle between the positive x-axis and the line segment from the origin to the point (x,y) by following the steps below (use the following figure): 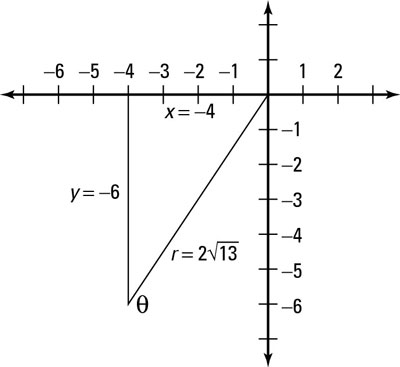 Finding the hypotenuse of a right triangle when given a point on the plane.