How to Rationalize a Radical Out of a Denominator

A convention of mathematics is that you don’t leave radicals in the denominator of an expression when you write it in its final form. Thus we do something called rationalizing the denominator. This convention makes collecting like terms easy, and your answers will be truly simplified.

A numerator can contain a radical, but the denominator can’t. The final expression may look more complicated in its rational form, but that’s what you have to do sometimes.

Rationalizing with one radical in the denominator

Rationalizing expressions with one radical in the denominator is easy. For example, with a square root, you just need to get rid of the square root. Normally, the best way to do that in an equation is to square both sides. For example,

However, you can’t fall for the trap of rationalizing a fraction by squaring the numerator and the denominator. For instance, squaring the top and bottom of

You must rationalize the denominator of a fraction when it contains a binomial with a radical. For example, look at the following equations:

Multiplying a number by its conjugate is really the FOIL method in disguise. Remember from algebra that FOIL stands for first, outside, inside, and last.

The middle two terms always cancel each other, and the radicals disappear. For this problem, you get x2 – 2.

Take a look at a typical example involving rationalizing a denominator by using the conjugate. First, simplify this expression:

To rationalize this denominator, you multiply the top and bottom by the conjugate of it, which is

The step-by-step breakdown when you do this multiplication is 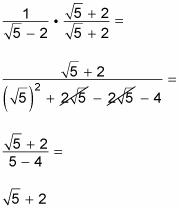 Here’s a second example: Suppose you need to simplify the following problem:

Simplify any radical in your final answer — always. For example, to simplify a square root, find perfect square root factors:

Also, you can add and subtract only radicals that are like terms. This means the number inside the radical and the index (which is what tells you whether it’s a square root, a cube root, a fourth root, or whatever) are the same.