Here are the general steps for synthetic division:

The 4 on the outside in the figure is the root you’re testing. The numbers on the inside are the coefficients of the polynomial. Here’s the synthetic process, step by step:

All you do is multiply and add, which is why synthetic division is the shortcut. The last number, 0, is your remainder. Because you get a remainder of 0, x = 4 is a root.

The other numbers are the coefficients of the quotient, in order from the greatest degree to the least; however, the quotient is always one degree lower than the degree of the original polynomial. So the quotient in this example is 2x3 – x2 – 25x – 12.

Whenever a root works, you should always automatically test it again in the answer quotient to see if it’s a double root, using the same process. A double root occurs when a factor has a multiplicity of two. A double root is one example of multiplicity. You test x = 4 again, as shown in the figure.

Whaddya know? You get a remainder of 0 again, so x = 4 is a double root. (In math terms, you say that x = 4 is a root with multiplicity of two.) You have to check it again, though, to see if it has a higher multiplicity. When you synthetically divide x = 4 one more time, it doesn’t work. The next figure illustrates this failure. Because the remainder isn’t 0, x = 4 isn’t a root again. 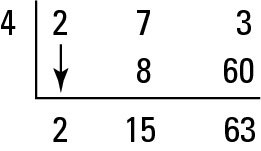 Testing the root again shows that it’s only a double root as far as the multiplicity goes.

The remainder theorem says that the remainder you get when you divide a polynomial by a binomial is the same as the result you get from plugging the number into the polynomial. For example, when you used long division to divide by x – 2, you were testing to see if x = 2 is a root. You could’ve used synthetic division to do this, because you still get a remainder of 100. And if you plug 2 into f(x) = 2x4 – 9x3 – 21x2 + 88x + 48, you also get 100.