How to Graph Conic Sections in Polar Form Based on Eccentricity

Here are the two equations that allow you to put conic sections in polar coordinate form, where (r, theta) is the coordinate of a point on the curve in polar form. Recall that r is the radius, and theta is the angle in standard position on the polar coordinate plane.

When graphing conic sections in polar form, you can plug in various values of theta to get the graph of the curve. In each equation above, k is a constant value, theta takes the place of time, and e is the eccentricity. The variable e determines the conic section:

For example, say you want to graph this equation:

Factoring out the 4 from the denominator gives you [

In order to keep the equation close to the standard form for polar conics, multiply the numerator and denominator by 1/4. This step gives you

Therefore, the constant k is 1/2 and the eccentricity, e, is 1/4, which tells you that you have an ellipse because e is between 0 and 1.

In order to graph the polar function of this ellipse, you can plug in values of theta and solve for r. Then plot the coordinates of (r, theta) on the polar coordinate plane to get the graph. For the graph of the example equation,

you can plug in

and find r in each case: 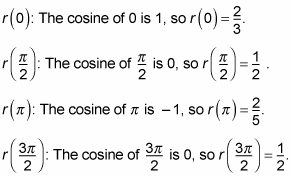 These four points are enough to give you a rough sketch of the graph. 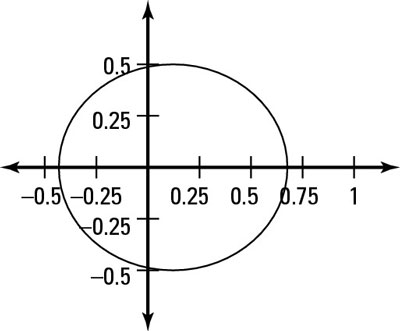 The graph of an ellipse in polar coordinates.

You can see the graph of the example ellipse in this figure.