How Limits Work with Functions

Not every function is defined at every value of x. Rational functions, for example, are undefined if the denominator of the function is 0. You can use a limit (which, if it exists, represents a value that the function tends to approach as the independent variable approaches a given number) to look at a function to see what it would do if it could.

To do so, you take a look at the behavior of the function as the variable x approaches the undefined value(s). For example, this function is undefined at x = 3:

To express a limit in symbols, you write

which is read as "the limit as x approaches c of f(x) is L." L is the limit you're looking for. For the limit of a function to exist, the left limit and the right limit must both exist and be equal:

If, and only if, the left-hand limit equals the right-hand limit can you say that the function has a limit for that particular value of c.

Mathematically, you'd let f be a function and let c and L be real numbers. Then

In real-world language, this setup means that if you took two pencils, one in each hand, and started tracing along the graph of the function in equal measures, the two pencils would have to meet in one spot in the middle in order for the limit to exist. (The figure shows that even though the function isn't defined at x = 3, the limit exists as x approaches 3.) 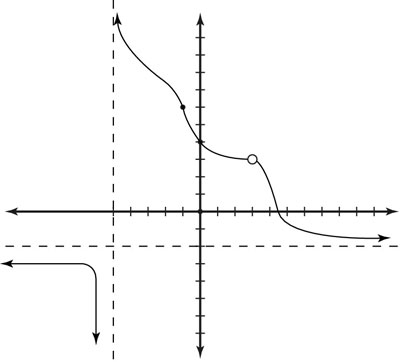 Finding the limit of a function graphically.

For functions that are well connected, the pencils always meet eventually in a particular spot (in other words, a limit would always exist). However, sometimes they do not (as you see in the figure as x approaches –5). The popular unit-step function is defined as f(x) = 0 for