Explore Book Buy On Amazon
The most common use of a line graph is to plot how numbers change over time. For example, the following figure is a line graph showing last year’s sales figures for Tami’s Interiors. 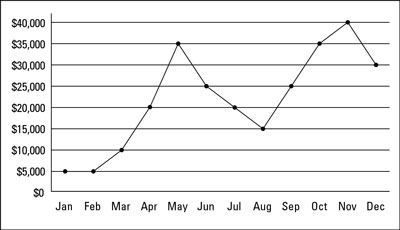 The line graph shows a progression in time. At a glance, you can tell that Tami’s business tended to rise strongly at the beginning of the year, drop off during the summer, rise again in the fall, and then drop off again in December.

Here are a few typical questions that you may be asked to show that you know how to read a line graph: