Working with More than One Transversal

When a parallel-lines-with-transversal drawing contains more than three lines, identifying congruent and supplementary angles can be kind of challenging. The following figure shows you two parallel lines with two transversals. 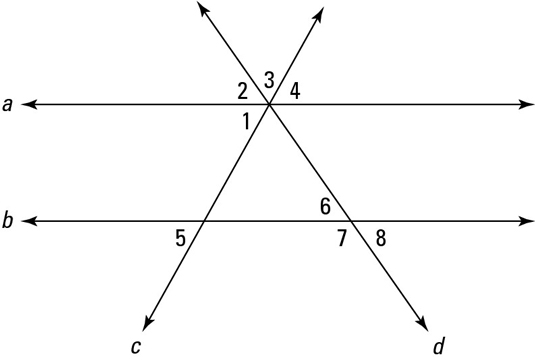 If you get a figure that has more than three lines and you want to use any of the transversal ideas, make sure you’re using only three of the lines at a time (two parallel lines and one transversal). If you aren’t using a set of three lines like this, the theorems just don’t work. With the above figure, you can use lines a, b, and c, or you can use lines a, b, and d, but you can’t use both transversals c and d at the same time. Thus, you can’t, for example, conclude anything about angle 1 and angle 6 because angle 1 is on transversal c and angle 6 is on transversal d.

The following list shows what you can say about several pairs of angles in the above figure, noting whether you can conclude that they’re congruent or supplementary. As you read through the list, remember the warning about using only two parallel lines and one transversal.