The Multiplication and division theorems are based on very simple ideas, but they do trip people up from time to time, so pay careful attention to how these theorems are used in the example proofs.

Like Multiples: If two segments (or angles) are congruent, then their like multiples are congruent. For example, if you have two congruent angles, then three times one will equal three times the other. 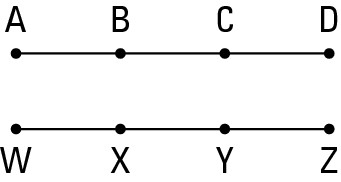 Look at the above figure.

When you look at the givens in a proof and you see one of the terms midpoint, bisect, or trisect mentioned twice, then you’ll probably use either the Like Multiples Theorem or the Like Divisions Theorem. But if the term is used only once, you’ll likely use the definition of that term instead.

You see how to use the Like Multiples Theorem in the next proof. 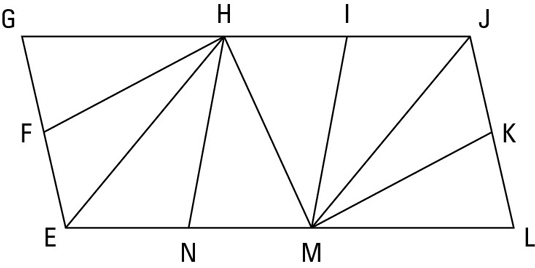 Game plan: Here’s how your thought process for this proof might go: Ask yourself how you can use the givens. In this proof, can you see what you can deduce from the two pairs of congruent angles in the given? If not, make up arbitrary measures for the angles.

Then, when you see trisect mentioned twice in the other givens, that should ring a bell and make you think Like Multiples or Like Divisions.

Reason for statement 2: Given.

Reason for statement 2: If a segment is added to two congruent segments, then the sums are congruent.

The Like Divisions Theorem is particularly easy to get confused with the definitions of midpoint, bisect, and trisect, so remember this: Use the definition of midpoint, bisect, or trisect when you want to show that parts of one bisected or trisected segment or angle are equal to each other. Use the Like Divisions Theorem when two objects are bisected or trisected (like line segments NE and DL in the preceding proof) and you want to show that a part of one (line segment NO) is equal to a part of the other (line segment AL).