The Geometry of Projectile's Motion

Projectile motion is the motion of a “thrown” object (baseball, bullet, or whatever) as it travels upward and outward and then is pulled back down by gravity. The study of projectile motion has been important throughout history, but it really got going in the Middle Ages, once people developed cannons, catapults, and related war machinery. Soldiers needed to know how to point their cannons so their cannonballs would hit their intended targets. 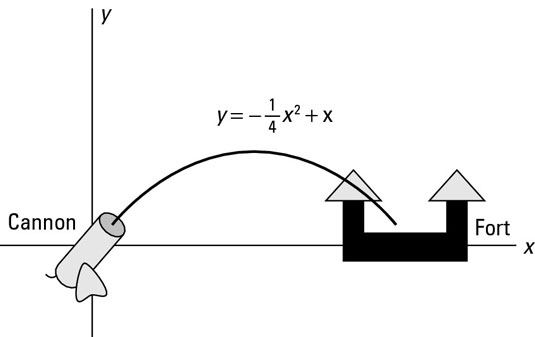 Galileo Galilei (A.D. 1564–1642), who’s famous for demonstrating that the Earth revolves around the sun, was the first to unravel the riddle of projectile motion. He discovered that projectiles move in a parabolic path (like the parabola

for example). The preceding figure shows how a cannonball (if aimed at a certain angle and fired at a certain velocity) would travel along this parabola.

Without air resistance, a projectile fired at a 45° angle (exactly half of a right angle) will travel the farthest. When you factor in air resistance, however, maximum distance is achieved with a shallower firing angle of 30° to 40°, depending on several technical factors.