Note that it’s the shape of half a square, cut along the square’s diagonal, and that it’s also an isosceles triangle (both legs have the same length). The following figure shows an example of a 45°- 45°- 90° triangle. 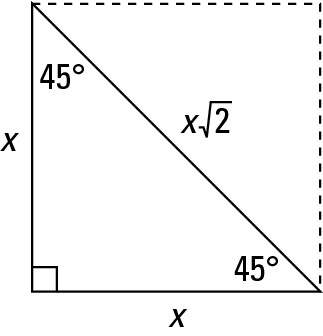 Try a couple of problems. Find the lengths of the unknown sides in triangles BAT and BOY shown in the following figure.

You can solve 45°- 45°- 90° triangle problems in two ways: the formal book method and the street-smart method. Try ’em both and take your pick.

The formal method uses the ratio of the sides from the first figure.

For triangle BAT, because one of the legs is 8, the x in the ratio is 8. Plugging 8 into the three x’s gives you

And for triangle BOY, the hypotenuse is 10, so you set the

from the ratio equal to 10 and solve for x: