How to Do an Indirect Proof

Indirect proofs are sort of a weird uncle of regular proofs. With an indirect proof, instead of proving that something must be true, you prove it indirectly by showing that it cannot be false.

Note the not. When your task in a proof is to prove that things are not congruent, not perpendicular, and so on, it’s a dead giveaway that you’re dealing with an indirect proof.

The best way to explain indirect proofs is by showing you an example. Here you go. 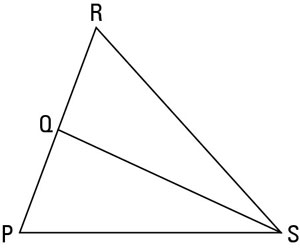 Here’s a game plan showing how you can tackle this indirect proof. You assume that the prove statement is false, namely that segment PS is congruent to segment RS, and then your goal is to arrive at a contradiction of some known true thing (usually a given fact about things that are not congruent, not perpendicular, and so on). In this problem, your goal is to show that angle PQS is congruent to angle RQS, which contradicts the given.

Note: After you assume that

it works just like a given. And after you identify your goal of showing

this goal now works like an ordinary prove statement.