How to Determine the Earth's Circumference

You can figure out the earth's circumference using a geometric formula that's over 2,000 years old! Contrary to popular belief, Christopher Columbus did not discover that the Earth is round. Eratosthenes (276–194 B.C.) made that discovery about 1,700 years before Columbus.

Eratosthenes was the head librarian in Alexandria, Egypt, the center of learning in the ancient world. He estimated the circumference of the Earth with the following method: He knew that on the summer solstice, the longest day of the year, the angle of the sun above Syene, Egypt, would be 0°, in other words, the sun would be directly overhead. So on the summer solstice, he measured the angle of the sun above Alexandria by measuring the shadow cast by a pole and got a 7.2° angle. 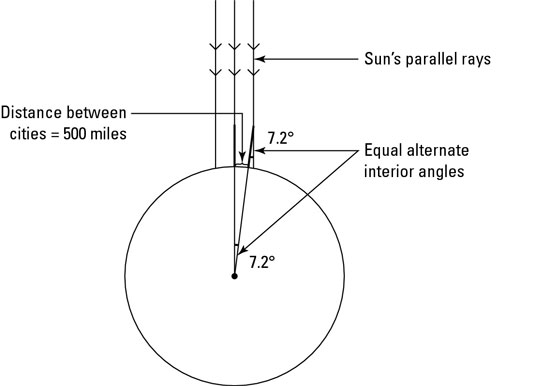 Eratosthenes divided 360° by 7.2° and got 50, which told him that the distance between Alexandria and Syene (500 miles) was 1/50 of the total distance around the Earth. So he multiplied 500 by 50 to arrive at his estimate of the Earth's circumference: 25,000 miles. This estimate was only 100 miles off the actual circumference of 24,900 miles!