How to Calculate the Area of a Quadrilateral

The quadrilateral area formulas are as follows: 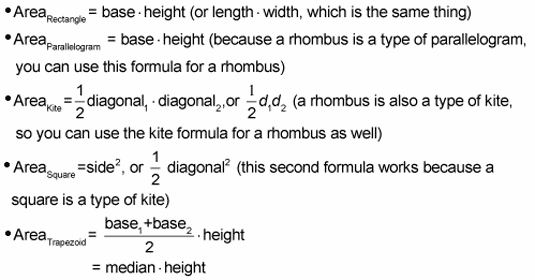 Note: The median of a trapezoid is the segment that connects the midpoints of the legs. Its length equals the average of the lengths of the bases. You use this formula for all trapezoids, including isosceles trapezoids.

And second, because the square is a special type of four quadrilaterals — a parallelogram, a rectangle, a kite, and a rhombus — you don’t really need a special area formula for a square