By: Steven Holzner and
Updated: 04-25-2016
From The Book: Differential Equations Workbook For Dummies 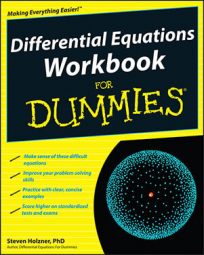 Explore Book Buy On Amazon
You can solve a differential equation in a number of ways. The two most effective techniques you can use are the method of undetermined coefficients and the power series method.

Then all you have to do is find a recurrence relation that gives you the coefficient an.