Ever want to determine the location of a line through a given point that’s tangent to a given curve? Of course you have! Here’s how you do it.

Determine the points of tangency of the lines through the point (1, –1) that are tangent to the parabola

If you graph the parabola and plot the point, you can see that there are two ways to draw a line that goes through (1, –1) and is tangent to the parabola: up to the right and up to the left (shown in the figure). 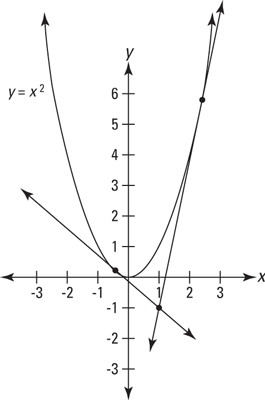 Thus, the two points of tangency are