How to Approximate Area with Midpoint Rectangles

A good way to approximate areas with rectangles is to make each rectangle cross the curve at the midpoint of that rectangle's top side. A midpoint sum is a much better estimate of area than either a left-rectangle or right-rectangle sum. The below figure shows why. 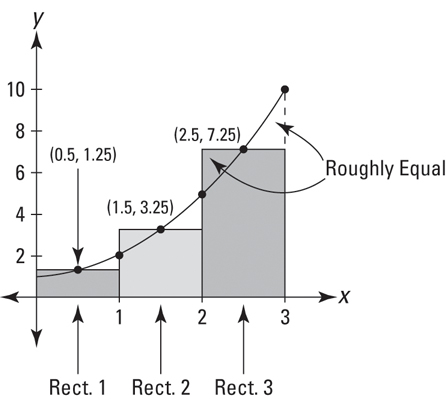 You can see in the figure that the part of each rectangle that’s above the curve looks about the same size as the gap between the rectangle and the curve. A midpoint sum produces such a good estimate because these two errors roughly cancel out each other.

Midpoint Rectangle Rule—You can approximate the exact area under a curve between a and b,

with a sum of midpoint rectangles given by the following formula. In general, the more rectangles, the better the estimate: