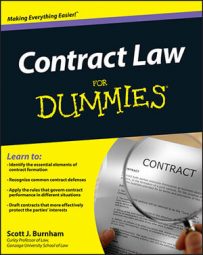 In contract law, a condition is an event that must occur before some performance is due. Parties may claim that they aren’t in breach of contract because the condition that had to occur before they had to perform hasn’t occurred. A condition can be express or implied:

Scott J. Burnham is the Curley Professor of Commercial Law at Gonzaga University School of Law. For 30 years he has taught Contracts at law schools internationally and throughout the U.S. He is also a prolific writer on legal topics and a consultant on contract drafting for numerous businesses.