How to Create Compelling Characters in Fictional Writing

By: Maggie Hamand and
Updated: 03-26-2016
From The Book: Creative Writing For Dummies 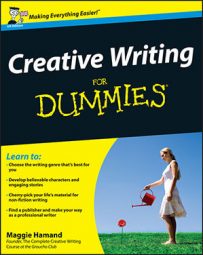 Believable, authentic characters are crucial to great stories and novels. Fictional characters should have the depth and power to inspire varied emotions such as love, hate and fear in a reader.

There are a number of ways you can go about creating characters. When writing fiction, you can often use a real-life person as a basis for a character, then change and adapt the person’s characteristics for the story you’re writing.

Think about the people closest to you and try to summarise their personalities. To get those creative juices flowing, you could try creating personalities for strangers you see on the street. Imagine what they do, what their interests are, what their life has been like.

Alternatively, you may find that a character simply comes to you seemingly from nowhere. This could happen because you’re tapping into the unknown aspects of your personality. Sometimes you may need to create a character from scratch to fill a particular function in your writing. This can be a lengthy process – you’ll have to think about every aspect of his behaviour, personality and appearance to create a believable character.

How does your fictional character look physically?

How your character looks can reveal a lot about their personality to the reader: people make snap judgements about people within a few seconds of seeing them. Think about what you want your character to represent through his or her appearance. You can make minor characters more memorable by giving them distinctive physical traits which readers will remember.

What are your character's thoughts?

It’s important for the reader to feel that they can share the character’s thoughts and feelings. Inner emotions can be brought out through expressions, intonation, body language. Try keeping a diary for your character. Think about what his writing style would be like, and whether he would reveal his innermost thoughts.

What actions and deeds are typical of your character?

Personality can also be brought out through actions. Think about how your character moves and behaves when alone and when in company. Is he naturally introspective or an extrovert? Write about how you character would go about an everyday activity, such as making a cup of tea: this can be much more revealing than you would first imagine.

How does your character talk?

Dialogue is one of the main ways you can directly reveal character, particularly if you’re writing about someone in the third person rather than from the inside. Imagine your character meets another character – write down their conversation. Consider how your character speaks, what his accent is like, how talkative he is.

Does your character's name matter?

Another key thing to consider is your character’s name: this will instinctively reveal something about the character and will create a first impression on the reader. As a general rule, you should avoid stereotypical characters. Often, such characters are one-dimensional and will not be particularly interesting for the reader.

Maggie Hamand is a novelist, non-fiction author and journalist. In 1998, Maggie founded the hugely successful Complete Creative Writing Course at the Groucho Club in London, and has been teaching there since: her students have included many published authors. She is the author of two novels, The Resurrection of the Body and The Rocket Man.