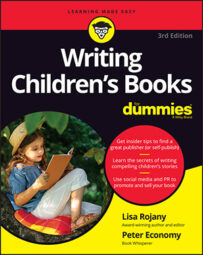 Sometime at the beginning of the writing process, you need to ask yourself just what makes the main character of your children's book move and groove. What does he really want that he simply cannot do without? What is it propelling him to do what he does throughout your story?

What burning desire lights him on fire and keeps him motivated from the first time you meet him until you bid adieu? Pretend you had to define your character in one sentence. How would you describe his distinguishing attribute, the one that sets him apart . . . the one that makes him memorable?

Every main character needs to have a goal or something he wants very badly. This is the character’s core; just as an apple without a core would collapse in on itself, a character without a discernible core is hollow and forgettable. If the term core is too obtuse, call it the character’s want.

A character’s want needs to be attainable. It can seem unrealistic, but so are many people’s wants — that doesn’t mean they stop wanting that one thing. And it also doesn’t mean that person won’t be able to reach that unrealistic goal; after all, aren’t many of the most remarkable achievements those believed impossible until someone made them real?

For example, in Snow White, a story everyone’s familiar with, the queen wants one thing: to be the most beautiful in the land. When her mirror informs her one day that she’s no longer the fairest one of all, she completely loses it. She decides that she wants to be the prettiest so badly she will stop at nothing to make sure her rival is eliminated — not even murder.

When all her spectacular efforts fail to make Snow White disappear forever, she hires a hit man (the hunter) to finally realize her dream, her desire — her want.