Snuggling Up to the Language of Poetry 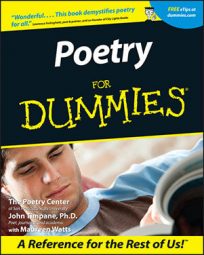 At times, language seems spiritual, as insubstantial as breath on a winter's day. Everything seems slathered and permeated with language — it's how we think and how we see. Yet language is also a physical thing, with characteristics and oddities — in sound and shape. To get closer to poetry, you need to fine-tune your sensitivity to language and to its histories, overtones, rhythms, meanings, and suggestions.

Noticing the beauty of language

Language is what successful poets are good with. Whether they're born or made, poets are language people. If you have a long relationship with poetry, you become more sensitive to language. You start spotting moments of beauty, start feeling the burst of meanings in a single phrase, the punch in a well-turned line. And poetry can show you how to pay attention — both to poems and to life in general. You may start noticing the details, the surprises, the unforgettable images.

Whenever you want to speak vividly or imaginatively, you can use language in special ways. When you're hungry, you may say, "I could eat a horse." Now, you couldn't actually eat a horse, and you know it. Somehow you and the people you're talking to recognize that you're being imaginative (not literal) in your language. Your audience switches into that imaginative gear and sees that you're really just saying that you're very, very hungry. In saying you could eat a horse, you're using a figure of speech (that is, any statement or turn of phrase that is not to be taken literally yet has a meaning you and your audience can recognize). These include metaphors (comparisons poets make without using like or as — in fact, any imaginative treatment of one thing as if it were another), similes (comparisons that use like or as, as in "he came in riding like a hurricane"), understatement, overstatement, and other unusual uses of language that poets use to stretch your imagination.

Another word you'll hear often in reference to poetry is image, which has many meanings. It can mean simply a vivid picture, or it can mean an especially powerful appeal to the senses.

Packing in more meaning with every word

With so many special uses of language, poetry can sometimes seem to be nonsense at first reading. But in fact, poets are trying to pack in more meaning per word than people pack in ordinary language. When you say, "Please give me a hamburger and a vanilla milkshake," you usually have one meaning and that's it. You want to be taken literally. But that's not always so with poetry. Poets set up words to resonate with many meanings at once — and often the only judge of all that is you, the reader.

How to judge? By paying close attention — but pay attention with an open, playful mind. Look for different possibilities in the words and phrases you're reading. If you find an implication (that is, something the poem suggests without coming out and saying it), great.

Try reading this poem, "About Face," by Fanny Howe. At first glance, it may seem close to nonsense, but stay with it, and you'll see that its unusual uses of language pack more possibilities of meaning per word than normal uses of language. You could say that the apparent "nonsense" ends up being supersense!

I wrap my bones around my head
Speak through the holes

or a mouth is light years
ahead of words.

Fanny Howe is using words differently from the way people normally use them. People usually speak literally, trying to limit their words to a single meaning. This poem is a tricky one, because so much of it has more than one possible meaning. Look at the title: "About Face." It could mean "a turnaround or reversal." Or, it could indicate that this poem concerns having a face.

None of the words in this poem is difficult or unusual. But everything that happens in it is very unusual, starting with the startling first line: "I wrap my bones around my head." The poet can't mean it literally — so you know you're in the presence of a metaphor. But a metaphor for what? Well, if the poem is about having a face, the line "Speak through the holes" makes sense, because holes (eyes, noses, and mouths) are what people speak through.

Think about speaking for a moment — just the act of using your mouth to make words. People are always speaking through the bones around their heads — they use their teeth, their jaws, and their facial bones to make the sounds of words. So "About Face" may be toying with the notion of what speaking involves.

Move on to the next stanza: When I speak, "It sounds like math / is rounding the curves" — two more simple and yet very tough lines. In math, you do a lot of rounding off of numbers, to the nearest tenth and so on. But then instead of rounding off of numbers, Howe gives you "rounding the curves." So speaking can "sound like math" (our guess) because it's always approximating the things people want to say or the things they want to point to in the world. People are always rounding things off — words are often insufficient, so people never actually say the exact thing they want, but they get close: They round things off.

"About Face" seems to be pointing out the way speaking doesn't quite do everything people pretend it does. Language does a good job, but it's approximate. So maybe that's how "a mouth is light years / ahead of words" — a mouth is something real, and words are only a bumbling attempt to get at it. No word could ever get all the way. All the word mouth can do is refer to a real mouth — it can't be a mouth or give you one. So a mouth always will remain "light years / ahead of words." (Yet another possible pun: We all are "ahead of words," and we have a head of words — we're thinking words all the time.)

Howe has us thinking about having bones in our faces, about mouths, about words, and about what words can and can't do. This witty, quizzical poet has brought together figures of speech to release numerous possibilities about the poem's meaning after you give it just a few moments' consideration.