How Phonetics Can Help You Understand Speech and Language Problems 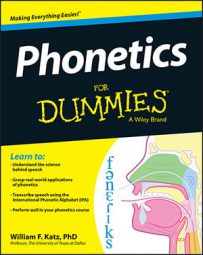 Phoneticians use the International Phonetic Alphabet (IPA) to distinguish sound substitutions (one speech sound switched for another) from distortion (slurring or mistiming) errors. This information is helpful to pinpoint the level at which a patient is making speech errors. The following terms can assist you in working with individuals with speech and language problems: