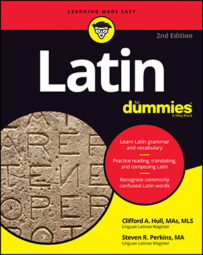 They say that old Latin teachers never die — they just decline. Whether this is true of teachers, declining and declension are facts of life that all Latin nouns must face. A declension is a group of nouns that form their cases the same way — that is, use the same suffixes. To decline a noun means to list all possible case forms for that noun.

Latin has five declensions; this article looks at the first two.

Table 2 shows the full declension of the noun puella (pu-ehl-luh), which means "girl."

Using the case endings to put the nouns in the right position, you can translate this sentence: "The girl loves the land of the farmers." Here's how:

Flamma fumo est proxima (fluh-muh foo-mo ehst prohks-ih-muh). According to the Roman playwright Plautus, "Flame is closest to smoke." In English, you say, "Where there's smoke, there must be fire." And where there's one noun declension, there must be more.

Second-declension nouns are a bit more expressive than first-declension nouns because they have two separate sets of endings for masculine and neuter genders. Second declension has few feminine nouns, and these have the same endings as masculine nouns.

Table 4 shows the full declension of the masculine nouns amicus and ager.

Second-declension neuter nouns have endings similar to those of the masculine/feminine genders. In fact, because they're so much alike, they can be grouped together in this declension. Pay particular attention to where the suffixes are different (shown in boldface in Table 5).

You can see that the only place where neuter nouns are different is in the nominative singular and nominative and accusative plural forms, which have the endings -um and -a. This presents an interesting situation: The suffix -a can also be a singular ending in first declension. Look at the following sentence:
Portat saxa puella in aqua. pohr-tuht suhk-suh pu-ehl-luh ihn uh-kwuh.

Portare means "to carry," a saxum is a "rock," puella means "girl," and aqua is "water." But if you know the definitions, you're only halfway to understanding the sentence. The preceding Latin sentence means one of the following translations, but which one?

Remember that word order in Latin plays less of a role in determining meaning than it does in English. The only way to know for certain is to know to what declension each of the nouns belongs, and checking a Latin dictionary can tell you this. Along with the definition and gender, each noun entry gives the nominative and genitive singular forms. You can spot a first-declension noun from a genitive singular ending in -ae, and a second-declension noun from a genitive singular ending in -i. The dictionary entries for the nouns in the preceding Latin sentence look like this:

From this, you can see that saxum is a second-declension word, and both puella and aqua are first declension because of the genitive singular endings (saxi, puellae, and aquae). Knowing this, you can figure out that the correct translation of the sentence is actually "The girl in the water carries rocks."

You can always determine the declension and gender of a noun just by checking its dictionary entry.