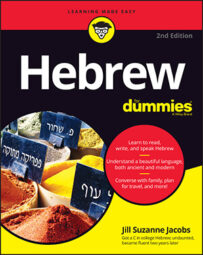 Explore Book Buy On Amazon
The ancient language of Hebrew is still spoken today, and if you want to speak it, you need to know common greetings, basic questions, and the Hebrew alphabet. A Jewish blessing in Hebrew shows the language in action.

If you’re attending a Shabbat dinner, familiarizing yourself with the common rituals of the special event is a great idea to help you thoroughly enjoy the night. The information below will help you understand what Shabbat is, common Jewish traditions, the Hebrew phrases and language to know, and what to expect from the night of festivities! Don't forget, in Hebrew, you read sentences in the opposite direction of English, from right to left.

Shabbat is the weekly day of rest and is considered to be the holiest day on the calendar of the Kabbalist. This important day is observed weekly on Friday nights at sundown and lasts until sundown on Saturday. The celebration begins in Jewish households in Israel and around the world during the Friday-night dinner.

אֲרוּחַת שַׁבָּת (ah-roo-ḥaht Shah-baht; Shabbat dinner/meal) is the focal point of the week, and families often take extra measures to ensure that the dinner and evening are special for family members and friends. The table is often decorated and set with aמַפָּה לְבָנָה (mah-pah leh-vah-nah; white tablecloth) and pretty dishes. Atop the table sits the כּוֹס לְקִדּוּשׁ (kos leh-kee-doosh; Kiddush cup), which is held when the blessing over the Sabbath day is said. Before the meal, Jewish people sing a song to welcome Sabbath angels and follow it with בְּרָכוֹת (brah-ḥoht; blessings) over the יַיִן (yah-yeen; wine) and לֶחֶם (leh–ḥehm; bread).

If you are dining with a Mizrahi family, they might serve יְרָקוֹת מְמֻלָּאִים בְּבָשָׂר (yeh-rah-koht mem-loo-eem beh-bah-sahr; meat-stuffed vegetables). Eating דָּג (dahg; fish) on שַׁבָּת (shah-baht; Sabbath) is also a traditional practice. One reason for this custom is connected to the גִּמַּטְרִיָּה (geh-mah-tree-ah; numerology) of the fish. In גִּמַּטְרִיָּה, (geh-mah-tree-ah; numerology) each Hebrew letter is assigned a numerical value. The numerical values of the letters in the Hebrew word for fish total seven, and שַׁבָּת shah-baht; Sabbath is the seventh day of the week!

Even outside Israel, Hebrew is an important part of Jewish life. Throughout history, the Jewish people have continued to hold on to the language of their native land.

The syntax (the arrangement of words to make sentences), or תַּחְבִּיר (tahḥ–beer), of a Hebrew sentence is quite different from that of English. Take a look at the basics of word order — what syntax looks like in English and how Hebrew is different. Also discover how to say there is and there isn’t, because if you can use this simple sentence construction, you can say a lot. Just plug in the noun of your choice, and you’ll be speaking Hebrew!

Putting your sentences in order

Both of these phrases mean the same thing: A new government rises. The order of the words doesn’t affect the meaning.

Look at another example in English. “Mollie kissed Harry” isn’t the same as “Harry kissed Mollie,” is it? Certainly not to Mollie — or, for that matter, to Harry.

You know it was Mollie who did the kissing whether you say:

These sentences, despite their different word order, all mean essentially the same thing: Mollie kissed Fred.

Now, pick a noun, any noun, and put a יֵשׁ or an אֵין in front of it. You’ll be speaking Hebrew!

When you make a question, you don’t change the order of the words like in English. You can ask a question in a few different ways. The first is by simply taking a statement and putting a question mark in your voice (by raising your voice at the end of the sentence.) Thus, when asked with the proper intonation, this statement can be a question ?יֵשׁ חָלָב הַמְּקָרֵר (yesh ḥah-lahv bah-mahk-rehr ?; there’s milk in the refrigerator?)

Yet another way to turn a statement into a question is to add the question word, הָאֵם (hah-eem) in front of the sentence. For example: ? הָאֵם יֵשׁ חָלָבהַמְּקָרֵר (hah-eem yehsh ḥah-lahv bah-mahk-rehr; is there milk in the refrigerator?) This last option is the most formal option, so you won’t hear it often.

While Hebrew differs from English in that you don’t need to flip the order in a statement in order to turn it into a question, the word-order flexibility of Hebrew allows the speaker to stress a particular part of the sentence by putting it at the beginning.

Greeting and saying good-bye in Hebrew

Hebrew offers you many choices of ways to say hello and good-bye. Here are a few things to say in greeting:

Ah, but parting is such sweet sorrow. When you have to hit the road, use one of these phrases to say good-bye:

In Hebrew, as in every other language, the time of day you greet a person often determines what you say. But Hebrew throws a bit of a twist into the standard mix. It also contains particular greetings that depend on whether you greet someone before or after the Jewish Sabbath. The Sabbath starts when the sun begins to set on Friday night and ends about 25 hours later at sundown on Saturday night when the sun has completely set.

The pattern of simply repeating the greeting as a reply holds true for all the time-sensitive greetings. The morning greeting is the only exception because you can reply with either בֹּקֶר טוֹב or בֹּקֶר אוֹר.

So, in the evening, you can say עֶרֶב טוֹב (eh-rehv tohv; good evening) whether you’re greeting someone or responding to another person’s salutation. At night, you can say לַיְלָה טוֹב (lye-lah tohv; good night). And, if someone is headed off to bed, you can wish him or her חֲלוֹמוֹת פָּז (ḥah-loh-moht pahz; golden dreams)!

Got that? Good. Now on to the Sabbath-related greetings. All day Friday and during the Sabbath, greeting people with the words that wish them a peaceful Sabbath is customary: שַׁבָּת שָׁלוֹם (shah-baht shah-lohm; have peaceful Sabbath). When the sun sets on Saturday night (and you can see three stars in the sky), the Sabbath is over. On שָׁבוּעַ טוֹב Saturday nights and even on Sundays, it’s customary to greet people with a cheery (shah-voo-ahtohv), wishing them a good week.

The Book of Genesis describes each day as beginning in the evening: “There was evening; there was morning; a first day.” Therefore, days and holidays on the Jewish calendar begin in the evening with the setting sun and last until the sun is completely set 25 hours later. The reason for 25 hours is just for safety. It should be exactly 24 hours, but rabbis added the extra hour so that we’ll never start the Sabbath too late or end the Sabbath too early.

Replying to a greeting

Knowing how to say hello and good-bye is a great start. But, if you want to get past the initial hello, you need a few more phrases in your back pocket (like what to say when someone asks how you’re doing). Who knows? These phrases could be the start of a beautiful friendship.

Dressing by the Jewish calendar

Of course, when you buy clothes, you want to dress for the season. Whether you are wearing בְּגָדִים יוֹמוֹמַיִם (beh-gah-deem yoh-mee-eem; casual clothes), לָבוּשׁ (lah-voosh chah-gee-gee; dressy clothes), or even your בִּגְדֵי שַׁבָּת (beeg-day shah-baht; Sabbath clothes, the Hebrew equivalent of “Sunday Best”), or if you live in a climate with four seasons, you want to have handy all kinds of clothes for the different weather.

Ah, fall — when the air is crisp and the leaves are colorful! On the Jewish calendar, fall is the time of the High Holidays, including Rosh HaShanah and Yom Kippur — the Jewish New Year and the Day of Atonement. Fall is a time for new beginnings. It’s also a great time to get some new clothes.

The following Hebrew words are a few fall items you may want to have on hand:

Winter! What a magical time of year. If your home area receives snow, this time can be especially fun — and cold! Thus, you need to bundle up. Following are some special items of winter clothing you may want to take out of storage when the temperatures start hovering around freezing:

Spring is wonderful! The days grow longer and warmer. Trees and flowers begin to bloom. And you can finally stop wearing those wool gloves and toss off that heavy coat in favor of a lighter jacket. You can now wear:

The dog days of summer! Long sunny days! Ice cream cones! And, of course, the clothes you can wear only on the hottest days of the year:

For example, the word for swimsuit in Hebrew is בֶּגֶד יָם (beh-gehd yahm), which means “sea suit.” Note: In Hebrew, the order is the opposite as it is in English. In the previous example, בֶּגֶד means clothes or suit while יָם means sea. So literally that means “clothing of the sea.” Furthermore, if the nouns have only one syllable, their pronunciation remains the same. The one exception is the word for room חֶדֶר (ḥeh-dahr). In סְמִיכוּת (Smiḥut), חֶדֶר (smee–ḥoot, ḥeh-dair) becomes חֲדַר (chah-dar). Hence, the Hebrew word for “dressing room” is חֲדַר הַהֻלְבַּשׁ (ḥah-dar hahl-bah-shah). If the first word in the סְמִיכוּת (Smiḥut) is masculine plural, the final מ (mem) drops off. For example, sunglasses is מִשְׁקְפֵי שֶׁמֶשׁ (meesh-kah-fey sheh-mesh). One more tidbit: If you want to add the word the ( הַ; hah) to a סְמִיכוּת (Smiḥut), put it in front of the second noun.

The Hebrew alphabet is comprised of 24 letters and a point system that denotes vowel sounds because the alphabet itself has no vowels. The following table lists the letters and their sounds followed by the points and which vowel sound each represents.

Jill Suzanne Jacobs is a fluent Hebrew speaker having picked up the language through study, three years of living in Israel, and multiple extended visits. She holds graduate degrees in Jewish and Israel education, and she taught in the classroom for ten years before moving into leadership roles in educational nonprofits. She is the author of the first edition of Hebrew For Dummies and mom to a second generation diaspora Hebrew speaker.