Locating the Verb in a Sentence

By: Geraldine Woods and
Updated: 08-16-2017
From The Book: English Grammar For Dummies

Explore Book Buy On Amazon
A scientific study by a blue-ribbon panel of experts found that 90 percent of all the errors in a sentence occurred because the verb was misidentified. Okay, there was no study. But it is true that when you try to crack a sentence, you should always start by identifying the verb. To find the verb, read the sentence and ask two questions: 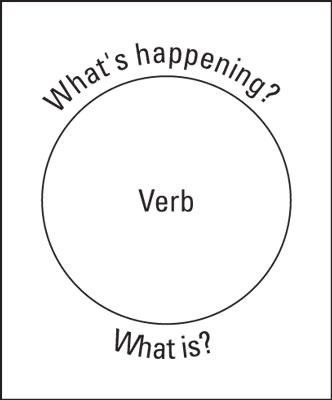 For example, in the sentence

Archie flew around the room and then swooped into his cage for a birdseed snack.

If you ask, "What is?" you get no answer, because there's no linking verb in the sentence.

Lola's new tattoo will be larger than her previous fifteen tattoos.

What's happening? Nothing. You have no action verb. What is? Will be. Will be is a linking verb.

Pop the question and find the verbs in the following sentences. For extra credit, identify the verbs as action or linking.

A. Michelle scratched the cat almost as hard as the cat had scratched her.

B. After months of up-and-down motion, Lester is taking the elevator sideways, just for a change of pace.

C. The twisted frown on Larry's face seems strange because of the joyful background music.

You may hear English teachers say, "the verb to sweep" or some such expression. In fact, to be is not actually a verb. It's an infinitive. An infinitive is to + a verb. (Some grammarians see the to as an add-on and count only the verb as an infinitive.) Don't worry about the terminology. The most important thing to know about infinitives is this: When you pop the question to find the verb, don't choose an infinitive as your answer. If you do, you'll miss the real verb or verbs in the sentence. Other than that, forget about infinitives!