Fidel Castro: Champion of the People or Cruel Dictator?

Fidel Castro, former President of Cuba, is a controversial and divisive world figure. He has been described by his supporters as a champion of anti-imperialism, humanitarianism, socialism, and the environment. His detractors call him a dictator who oversaw numerous human rights violations inflicted on the people of Cuba. For better or worse, his life shaped the history of Cuba in the twentieth century.

Castro came to power in Cuba in 1959 after playing a central role in the revolutionary overthrow of General Fulgencio Batista, the Cuban dictator at the time. The communist revolution that brought Castro to power was intended to empower the people, yet in the 40+ years that he governed, Castro was never elected to office. Castro remained president of Cuba until 2008. 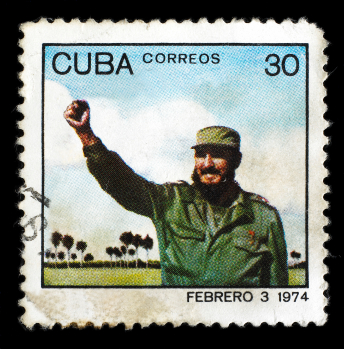 Fidel Castro, the making of a revolutionary

Fidel Alejandro Castro Ruz is the illegitimate son of a wealthy sugarcane farmer, Angel Castro y Argiz, an immigrant from Spain who prospered after moving to Cuba and starting his farm. Although Castro's father was married to another woman at the time, he had five children out of wedlock with a servant employed in his house, Lina Ruz Gonzalez, Castro's mother.

Castro spent his early years on the family farm and in catholic boarding schools. He was good at sports and showed no bent toward politics until he began law school at the University of Havana — where he quickly became involved in the student political movement. The violence perpetrated by the Cuban government against dissenting students and student groups completed Castro's transformation into a revolutionary.

In 1947, Castro joined the Caribbean Legion, a group whose goal was to rid the Caribbean of dictatorships. The following year, Castro traveled to Bogota, Columbia where he spontaneously gained first-hand experience with popular uprisings. When a popular Columbian politician, Jorge Eliecer Gaitan, was assassinated, riots broke out. Castro grabbed a rifle and joined the rioters.

After returning to Cuba, Castro became a prominent figure in protests against the government while continuing his university studies. In 1950, he graduated from Law school and began practicing law.

Castro's interest in politics continued to grow, as did his desire to improve the lives of Cuba's poorest classes. Castro became a candidate in the 1952 election for a seat in Cuba's House of Representatives. However, the elections were never held as General Batista seized the reins of power from the previous government in a military coup.

From the beginning of Batista's rule, Castro fought against him. At first Castro tried using the courts to legally oust Batista from office, but when that failed, he began to organize an underground group of rebels to replace Batista by armed force.

On July 26, 1953, Castro and about 160 armed men assaulted the Moncada Barracks in Santiago de Cuba, a Cuban military base. Castro's force was soundly defeated by the trained soldiers stationed at the base and he and his brother were captured and put on trial.

After delivering a passionate speech at his trial, Castro was sentenced to 15 years in prison, but was released after serving only two years because Batista no longer considered Castro a threat. By that time, Batista had secured the backing of the United States government and the Cuban business community and did not imagine that a handful of insurgents could topple such a power base.

Upon his release from prison, Castro went to Mexico and spent the next year organizing the "26th of July Movement." Named after the date of the failed Moncada Barracks attack, the group had only one goal — the overthrow of Batista. On December 2, 1956, Castro and his 26th of July Movement rebels landed on Cuban soil with the intention of inciting a revolution. Opposed by superior forces, the rebels took heavy losses before scattering into the hills to begin guerrilla warfare against Batista's government.

Over the next two years as the ranks of Castro's guerilla forces swelled with volunteers, town after town were wrenched from government control. Castro won the hearts and minds of the Cuban people in the countryside who fed and hid his forces. The fortunes of war turned against Batista as he lost the popular support of the people and, after suffering numerous defeats, Batista fled Cuba on January 1, 1959.

Castro as president of Cuba

Manuel Urrutia was selected as president of the new government and Castro was placed in charge of the military. However, by July 1959 Castro had effectively taken over as leader of Cuba, a position he held for the next four decades.

During 1959 and 1960, Castro made radical changes in Cuba. He nationalized industries, collectivized agriculture, and seized American owned farms and businesses — while further antagonizing the United States by establishing a strong relationship with the Soviet Union. Although he denied the labels, Castro moved Cuba through Socialist reforms into becoming the first communist country in the Caribbean.

Because of his alliance with the Soviet Union, the United States wanted Castro out of power. In April 1961, the United States sponsored the ill-fated Bay of Pigs invasion by anti-Castro Cuban exiles — which failed with great loss of life amongst the invaders.

By 1962 in an effort to cripple the Cuban economy, the U.S. had imposed a near total embargo of trade with Cuba. Cuban products were no longer legal to obtain in the United States, U.S. companies could no longer do business with Cuba, and American citizens were prohibited from visiting Cuba. Over the years, the United States made hundreds of attempts to assassinate Castro, all without success.

Over the next four decades, some Cubans benefited from Castro's educational and land reforms, but most Cubans suffered from food shortages and lack of personal freedoms.

Hundreds of thousands of Cubans fled to the United States seeking the necessities of life. They found ways to leave despite the lack of commercial transportation and the difficulty getting permission to go.

Having relied on Soviet aid and trade to keep the Cuban economy afloat, Castro found himself suddenly isolated after the downfall of the Soviet Union in 1991. With the U.S. embargo against Cuba still in effect, Cuba's economic situation suffered greatly in the 1990's.

In July 2006, Castro's ill-health forced him to begin to hand over the reins of power to his brother, Raul. Over the next two years, Fidel Castro remained involved in the day to day running of the government alongside Raul Castro, but in 2008, after continued health setbacks, Fidel resigned the presidency to Raul and retired to an advisory role. Without any official role in the government, Fidel Castro played the part of Cuba's elder statesman, voicing opinions and meeting dignitaries while remaining mostly out of the public eye.

Castro's first wife was his college sweetheart, Mirta Diaz-Balart, who was from a wealthy, well-connected family. They were married in October 1948 and divorced in 1955. The couple had one child together, a son named Fidelito.

Castro and his second wife, Dalia del Valle, married in 1980. The couple had five children together before getting married.