By: Lisa Arnold and Marianne Egan and
Updated: 05-14-2021
From The Book: Fashion Drawing For Dummies

Explore Book Buy On Amazon
Long and lean is the overall motto of fashion design for women. Legs, arms, and torsos on female bodies are drawn at unrealistic lengths and widths. Male and children’s bodies are drawn a little more realistically, but they also have their own fashion proportion rules.

Life-drawing class instructors often pound into students’ brains that the head fits into the average adult body seven to eight times. In other words, if you were to stack seven or eight heads on top of one another, you’d have the figure’s full height. Using the head as a unit of measurement helps you establish the proper proportions between the different parts of a figure.

In most fashion illustrations, the head fits into the adult body 11 times. This rule, often called the head count, illustrates one of the biggest differences between figure drawing and fashion drawing, and it’s the one most responsible for the elegant look of fashion illustration. The head count keeps the figure’s head small in relation to the body and helps you lengthen the arms and legs in a graceful way. 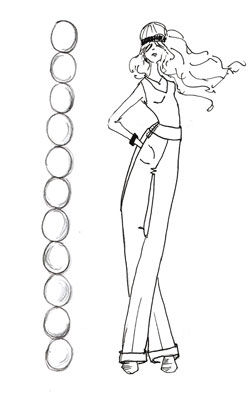 But whatever head count you use, be sure to go tall! Models are taller today than ever; some are practically skyscrapers, standing over 6 feet. Because fashion is all about keeping up with the times and even projecting looks for the future, your drawings must reflect that as well.

Differences between female and male proportions

In the real world, although men are generally taller and broader than their female counterparts, men’s and women’s proportions are about the same. But in the fashion illustration world, things get a little more complicated. Both men and women are 11 heads tall, but you must distribute the height differently: Women have longer legs, whereas men have longer torsos. 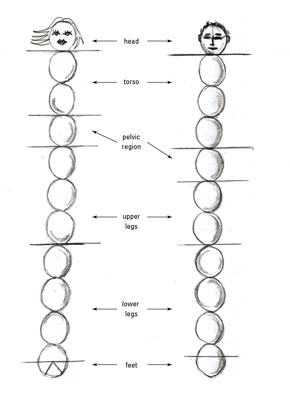 Children’s proportions: So cute, so different!

You can’t forget the littlest of models. Though children may be mirror images of their parents as far as facial features go, kids are extremely different from their parents in terms of proportions, a fact that’s reflected in fashion drawing.

In fashion drawing, a child’s head fits into his or her body about five times, compared to 11 times for an adult. Obviously, adults are much taller than children, but their other proportions, including head size and neck length, are also completely different.

Every little kid has a big head, relatively speaking. Kids also don’t have long, elegant necks, even for fashion illustration. Children 10 years and older start to shoot up in height and grow into more adult proportions.

Here’s the most important proportion-related rule to keep in mind when drawing kids: Fashion kids don’t have long, lean body lines. Although kids can look really hip instead of prim, you still don’t want to exaggerate the body as you would do with an adult in fashion illustration. A long, willowy neck on a 9-year-old would be pretty odd looking!

Stay away from long, lean, and mean lines for now, and keep kids looking like kids for as long as you can.

When proportioning a child, remember these rules: