How do you customize a PHP server? What is an integrated development environment? Find these and other scattered coding details here. 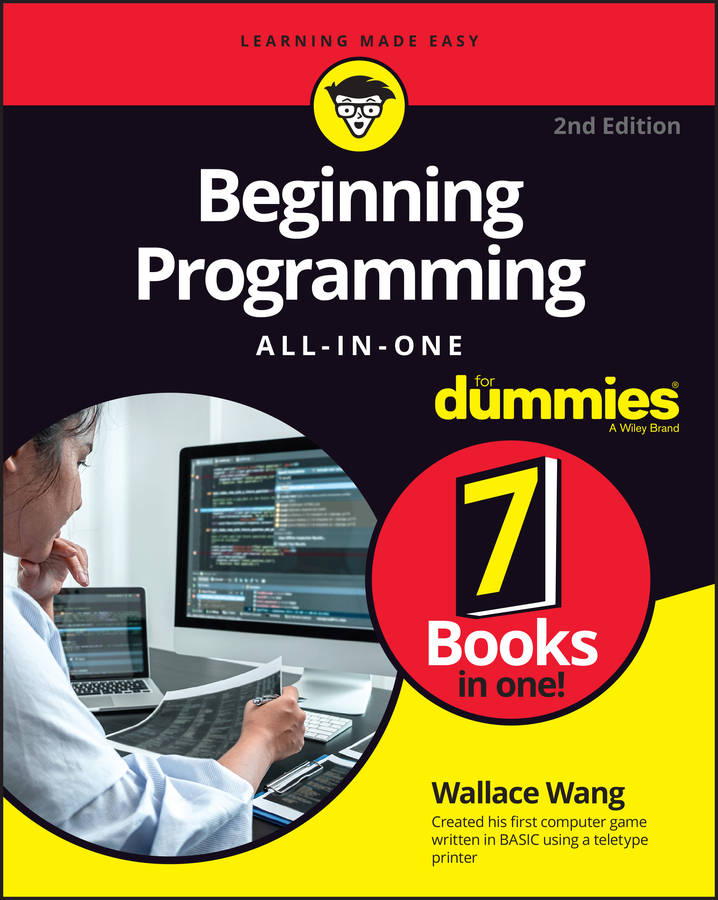 Let there be code! Beginning Programming All-in-One For Dummies offers one guide packed with 7 books to teach you programming across multiple languages. Coding can seem complex and convoluted, but Dummies makes it simple and easy to understand. You’ll learn all about the principles of programming, algorithms, data structures, debugging programs, unique applications of programming and more while learning about some of the most popular programming languages used today. Move confidently forward in your computer science coursework or straight into the workforce. You’ll come away with a rock-solid foundation in the programming basics, using data, coding for the web, and building killer apps. Learn the basics of coding, including writing and compiling code, using algorithms, and data structures Get comfortable with the syntax of several different programming languages Wrap your mind around interesting programming opportunities such as conducting biological experiments within a computer or programming a video game engine Develop cross-platform applications for desktop and mobile devicesThis essential guide takes the complexity and convolution out of programming for beginners and arms you with the knowledge you need to follow where the code takes you. 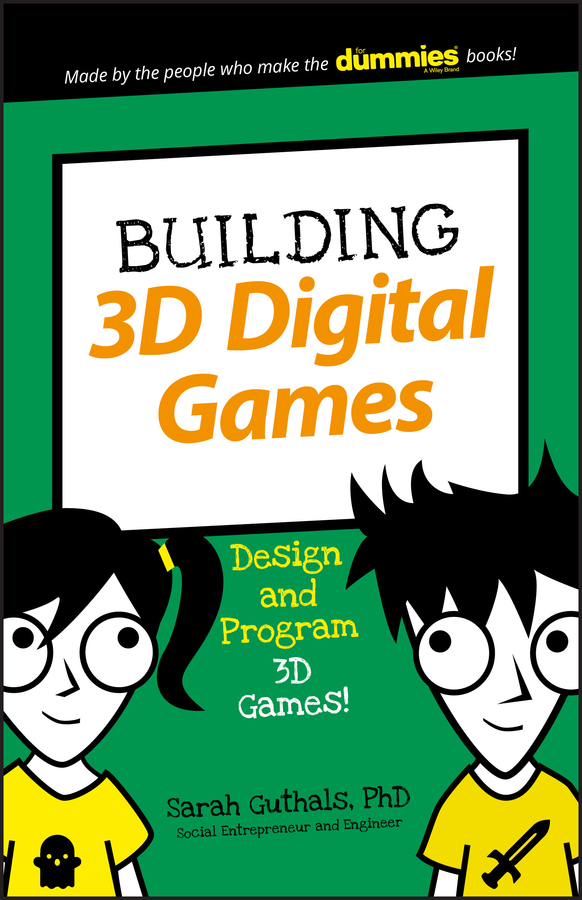 A technology book for kids! Do you want to create 3D digital games that'll impress your friends, family, and even yourself? This book shows you how to use Alice, a free 3D game programming environment, to make seriously cool video games you'll have as much fun building as you will playing! Create your own adventure—recreate your favorite story by giving the characters new choices and writing your own ending When zombies attack—make your very own escape room maze and attempt to defeat the enemy before it defeats you Technology Requirements: Hardware – PC or tablet with internet connection running Windows® 7 or higher or Mac with internet connection running Mac OS X® 10.7 or higher Software – Alice–a free programming platform that can be downloaded at alice.org.

Develop faster with DevOps DevOps embraces a culture of unifying the creation and distribution of technology in a way that allows for faster release cycles and more resource-efficient product updating. DevOps For Dummies provides a guidebook for those on the development or operations side in need of a primer on this way of working. Inside, DevOps evangelist Emily Freeman provides a roadmap for adopting the management and technology tools, as well as the culture changes, needed to dive head-first into DevOps. Identify your organization’s needs Create a DevOps framework Change your organizational structure Manage projects in the DevOps world DevOps For Dummies is essential reading for developers and operations professionals in the early stages of DevOps adoption.

Code collaboratively with GitHub Once you’ve learned the basics of coding the next step is to start sharing your expertise, learning from other coding pros, or working as a collaborative member of development teams. GitHub is the go-to community for facilitating coding collaboration, and GitHub For Dummies is the next step on your journey as a developer. Written by a GitHub engineer, this book is packed with insight on how GitHub works and how you can use it to become a more effective, efficient, and valuable member of any collaborative programming team. Store and share your work online with GitHub Collaborate with others on your team or across the international coding community Embrace open-source values and processes Establish yourself as a valuable member of the GitHub community From setting up GitHub on your desktop and launching your first project to cloning repositories, finding useful apps on the marketplace, and improving workflow, GitHub For Dummies covers the essentials the novice programmer needs to enhance collaboration and teamwork with this industry-standard tool.

Your guide to the functional programming paradigm  Functional programming mainly sees use in math computations, including those used in Artificial Intelligence and gaming. This programming paradigm makes algorithms used for math calculations easier to understand and provides a concise method of coding algorithms by people who aren't developers. Current books on the market have a significant learning curve because they're written for developers, by developers—until now.  Functional Programming for Dummies explores the differences between the pure (as represented by the Haskell language) and impure (as represented by the Python language) approaches to functional programming for readers just like you. The pure approach is best suited to researchers who have no desire to create production code but do need to test algorithms fully and demonstrate their usefulness to peers. The impure approach is best suited to production environments because it's possible to mix coding paradigms in a single application to produce a result more quickly. Functional Programming For Dummies uses this two-pronged approach to give you an all-in-one approach to a coding methodology that can otherwise be hard to grasp. Learn pure and impure when it comes to coding Dive into the processes that most functional programmers use to derive, analyze and prove the worth of algorithms Benefit from examples that are provided in both Python and Haskell Glean the expertise of an expert author who has written some of the market-leading programming books to date If you’re ready to massage data to understand how things work in new ways, you’ve come to the right place!

An easy-to-understand primer on Virtual Reality and Augmented Reality Virtual Reality (VR) and Augmented Reality (AR) are driving the next technological revolution. If you want to get in on the action, this book helps you understand what these technologies are, their history, how they’re being used, and how they’ll affect consumers both personally and professionally in the very near future. With VR and AR poised to become mainstream within the next few years, an accessible book to bring users up to speed on the subject is sorely needed—and that’s where this handy reference comes in! Rather than focusing on a specific piece of hardware (HTC Vive, Oculus Rift, iOS ARKit) or software (Unity, Unreal Engine), Virtual & Augmented Reality For Dummies offers a broad look at both VR and AR, giving you a bird’s eye view of what you can expect as they continue to take the world by storm. * Keeps you up-to-date on the pulse of this fast-changing technology * Explores the many ways AR/VR are being used in fields such as healthcare, education, and entertainment * Includes interviews with designers, developers, and technologists currently working in the fields of VR and AR Perfect for both potential content creators and content consumers, this book will change the way you approach and contribute to these emerging technologies.

Speak the languages that power the web With more high-paying web development jobs opening every day, people with coding and web/app building skills are having no problems finding employment. If you're a would-be developer looking to gain the know-how to build the interfaces, databases, and other features that run modern websites, web apps, and mobile apps, look no further. Web Coding & Development All-in-One For Dummies is your go-to interpreter for speaking the languages that handle those tasks. Get started with a refresher on the rules of coding before diving into the languages that build interfaces, add interactivity to the web, or store and deliver data to sites. When you're ready, jump into guidance on how to put it all together to build a site or create an app. Get the lowdown on coding basics Review HTML and CSS Make sense of JavaScript, jQuery, PHP, and MySQL Create code for web and mobile apps There's a whole world of opportunity out there for developers—and this fast-track boot camp is here to help you acquire the skills you need to take your career to new heights!

Explore the engine that drives the internet It takes a powerful suite of technologies to drive the most-visited websites in the world. PHP, mySQL, JavaScript, and other web-building languages serve as the foundation for application development and programming projects at all levels of the web.  Dig into this all-in-one book to get a grasp on these in-demand skills, and figure out how to apply them to become a professional web builder. You’ll get valuable information from seven handy books covering the pieces of web programming, HTML5 & CSS3, JavaScript, PHP, MySQL, creating object-oriented programs, and using PHP frameworks. Helps you grasp the technologies that power web applications       Covers PHP version 7.2 Includes coverage of the latest updates in web development Perfect for developers to use to solve problems This book is ideal for the inexperienced programmer interested in adding these skills to their toolbox. New coders who've made it through an online course or boot camp will also find great value in how this book builds on what you already know.

A technology book for kids! Learning how to code can be like learning a foreign language.This book serves as an excellent guide to help you start writing in the odd-looking languages that make the web work. Follow simple steps as you work with real code to build your own web robots. Create your robot—write code that builds your robot's body and structure Give your bot some style—add code lines that customize your robot's color and shape Get your robot moving—finish off your robot with code that teaches it how to dance Technology Requirements: Hardware – PC or tablet with Internet connection running Windows 7 or higher or Mac with Internet connection running Mac OS X 10.7 or higher Software – Web browser to access JSFiddle.net: Google Chrome™, Mozilla Firefox, Apple Safari, Microsoft Edge, or Microsoft Internet Explorer version 9.0 or higher

Learn to create powerful and unique websites with HTML5 and CSS3 HTML5 and CSS3 have ushered in an entirely new era in web development and web design. This easy-to-understand full-color guide presents the elements of design and development as equal; therefore, both designers and developers will benefit from learning how to leverage the power behind HTML5 and CSS3. The two-page spreads and helpful insight show you how to use HTML5 and CSS3 in conjunction in order to create websites that possess both powerful function and beautiful design. Incorporates all the trademark elements of the For Dummies series writing style - approachable, friendly, reliable, and functional - to assist you in gaining a solid foundation of the basics Fills the void for both developers and designers who are looking to merge the power and function of HTML5 and CSS3 Features a website with code and templates HTML5 and CSS3 For Dummies covers what you need to know to use HTML5 and CSS3, without weighing you down in unnecessary information.