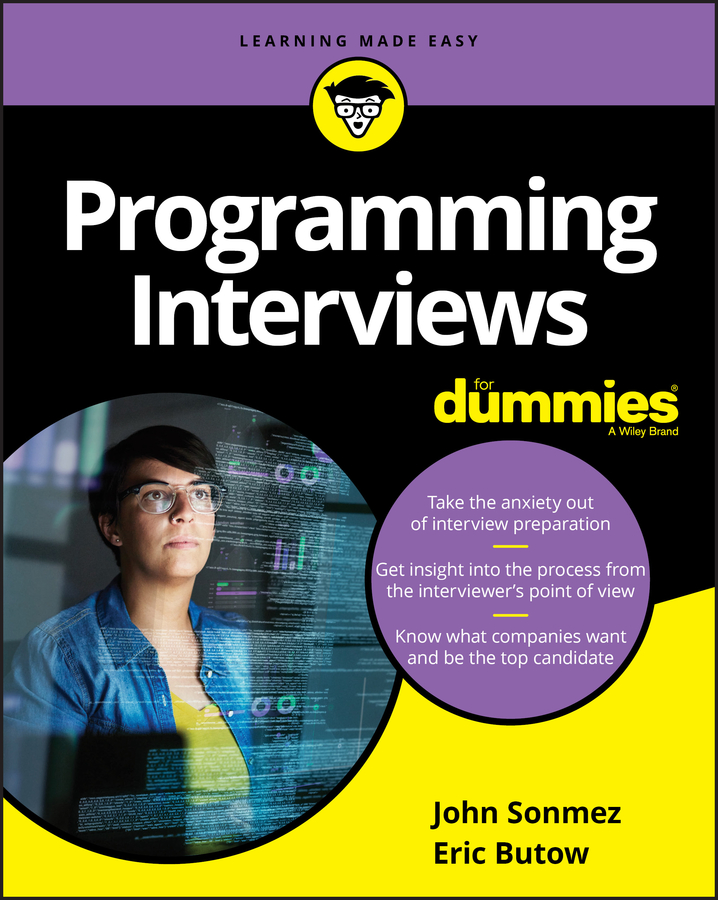 Get ready for interview success

Programming jobs are on the rise, and the field is predicted to keep growing, fast. Landing one of these lucrative and rewarding jobs requires more than just being a good programmer. Programming Interviews For Dummies explains the skills and knowledge you need to ace the programming interview.

Interviews for software development jobs and other programming positions are unique. Not only must candidates demonstrate technical savvy, they must also show that they’re equipped to be a productive member of programming teams and ready to start solving problems from day one. This book demystifies both sides of the process, offering tips and techniques to help candidates and interviewers alike.

Programming Interviews For Dummies gives readers a clear view of both sides of the process, so prospective coders and interviewers alike will learn to ace the interview.

Articles From Programming Interviews For Dummies

View Article
Trades, Tech, & Engineering Careers 10 Non-Technical Questions You May Be Asked in a Programming Interview

Salary negotiations can be a bit of a last hurdle in landing your programming dream job. You may have the warm and fuzzies about a company, but if they can’t come close to your expected salary, it may be a no go for this programming job. First you’ll want to conduct some research to learn about the average salary for the position you’d like to expect. Don’t assume your last salary is the average. Once you’ve done your salary research and you have your cards ready, the company will try to get you to at least ante up if not reveal one or more cards. One way companies do this is by bluntly asking, “What is your current salary?” You may receive a less blunt but similar question; for example, Salesforce asks, “What is the compensation you expect?” You may feel no matter how the company asks you questions about salary, it’s perfectly reasonable to answer them, and so it feels uncomfortable not to divulge this information. However, doing so will put you at a disadvantage. Learn the company’s expectations before salary negotiations begin The company representatives already have an advantage because they’ve researched typical salary information for programming jobs — probably more than you have — and they also know what they’re paying their own employees. So, they want to use one of three strategies to pay you as little salary as possible when you start your programming job: They want to get a number from you and then give you a slightly higher offer so it looks like they’re being generous. If you give the company representatives a salary amount that’s on the lower end of their wage scale, or a number that’s even lower than the wage scale because you haven’t done your homework, then they’ll offer that lower amount. If you discover later that you should have asked for a higher amount and you try to negotiate a higher wage, the company representatives will claim the wage they’ve offered is in line with your expectations. If you answer with a number that’s too high, the company may not want to pay you that much money . . . at least not right away. If you can’t negotiate a lower salary to start and work up to the salary you’re looking for over time — that is, if the company is even willing to negotiate — then the company will walk away from the table. Play the salary negotiation game by protecting your expected number So, the name of this salary negotiation game is that the person who offers the amount first loses, and it’s important that the company gives you the first offer. Company representatives know this, too, and that’s why they’ll be so insistent on asking you some variant of “What are you looking for?” You can politely answer these salary-related questions in one of several ways depending on your feel of the situation: I would rather not talk about that right now. I can’t reveal that amount because it’s proprietary information from my current employer. I’d rather not reveal that information because I think it would put me in a disadvantage. I don’t want to reveal that information because I don’t see how it’s relevant to the job you’re hiring me for. I prefer to discuss salary and other benefits when we decide we’re going to work together. I have a full benefits package and salary is just one part of it, so the salary part by itself doesn’t give me enough context to be used in any kind of evaluation or negotiation. I’ll consider any reasonable offer. When salary negotiations hinder further conversation If someone from human resources or your potential boss insists on salary information to move on, then based on the homework you did finding salary information online, it’s best to give a salary range that’s at the higher end of your expectations. Then the company will finally give you an offer that will likely be at the low end of that range, but at least you can still negotiate the price higher because now the company representatives know the range they’re working with. If you have done the interview prep work and researched average salaries for the industry you’re targeting, you should feel confident in your programming skills and expect what to get paid what you’re worth. Even if it feels like you’re asking for too much. Salary negotiations are about finding what you and the company can happily live with.

View Article
Trades, Tech, & Engineering Careers How to Land a Programming Interview: 10 Ways to Stand Out