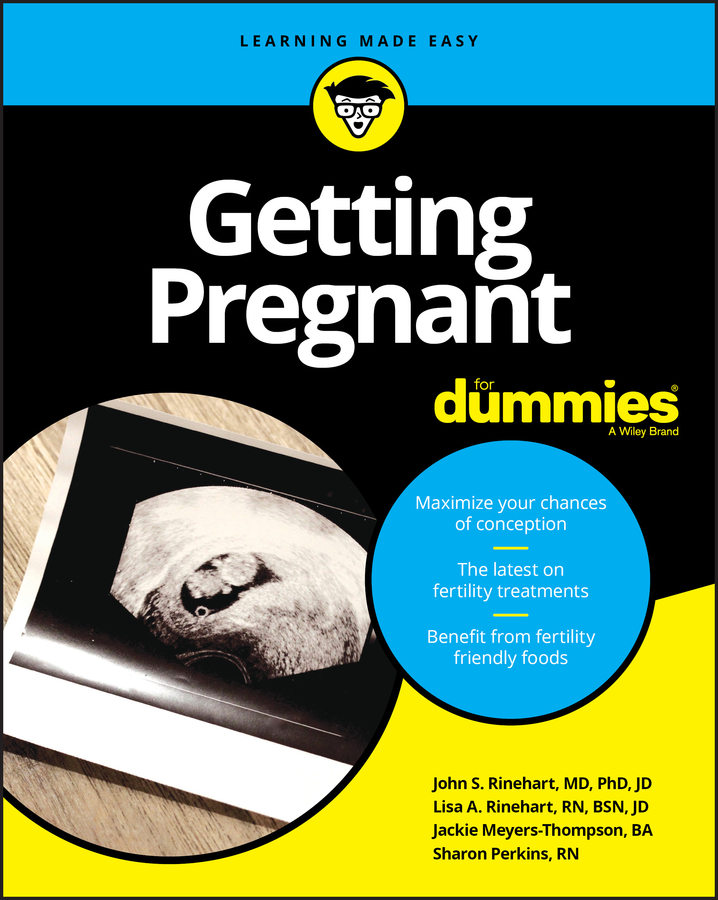 Getting Pregnant For Dummies

For millions of people, starting a family is a lifelong dream. However, many face challenges in welcoming children into the world. According to the Centers for Disease Control and Prevention (CDC), approximately 12% of women in the US from ages 15 to 44 have difficulty getting pregnant or staying pregnant. A variety of factors exist that can contribute to infertility, such as ovulation disorders, uterine abnormalities, congenital defects, and a host of environmental and lifestyle considerations. But infertility is not just a female problem. For approximately 35% of couples with infertility, a male factor is identified along with a female factor, while in 8% of couples, a male factor is the only identifiable cause. Fortunately, there are many treatment options that offer hope.

Getting Pregnant For Dummies discusses the difficulties related to infertility and offers up-to-date advice on the current methods and treatments to assist in conception. This easy-to-read guide will help you understand why infertility occurs, its contributing risk factors, and the steps to take to increase the chances of giving birth. From in vitro fertilization (IVF) to third party reproduction (donor sperm or eggs and gestational surrogacy) to lifestyle changes to understanding genetic information to insurance, legal and medication considerations, this bookcovers all the information you need to navigate your way to the best possible results. Packed with the latest information and new developments in medical technology, this book:

Getting Pregnant For Dummies is an indispensable guide for every woman trying to conceive and for men experiencing infertility issues.

Articles From Getting Pregnant For Dummies

If a couple tries to conceive but can’t seem to do it, one of the first things that doctors look for is a problem with the man’s sperm. Sperm compose about 5 to 10 percent of semen, and are the only part of the semen that can cause pregnancy. If a man is infertile, there is a problem with his sperm — often a low sperm count or low motility. Sometimes, male infertility can be treated. Just because testicles look normal doesn’t mean that they are fully functioning. The most common problems of male infertility are: Low sperm count, which means that the man isn’t producing enough sperm Low motility, where the sperm he is producing lack sufficient ability to swim to the egg The basis for the problems may be abnormal sperm production, which can be difficult to treat, or that the testicles are too warm. Heat is known to decrease sperm count, so the solution could be as simple as changing the style of underwear from tighty-whities (briefs) to boxers. Another cause can be a blockage somewhere along the line, which may be corrected through surgery. Interestingly enough, most semen analysis is done by gynecologists, specialists in the female reproductive system. A gynecologist is usually the first person a woman consults when she has problems getting pregnant. Commonly, the gynecologist asks that the man’s sperm be analyzed. If the tests reveal a problem with the sperm, the man is sent to a urologist for further evaluation.

Getting pregnant can be a complex and lengthy process for those diagnosed with infertility. Getting through the fertility treatment may seem difficult. Following are a few of our cheat lists to not only help you decipher fertility testing but also help you understand fertility treatment a little better.

If we have eggs, we need sperm to create embryos! So, while you were having your eggs retrieved for insemination, your partner was probably collecting a sperm sample. Or, perhaps you are using frozen sperm from your partner or a sperm donor. Regardless of the method or source, the laboratory will be working with that specimen to get it ready to meet its partner. First comes identifying the appropriate specimen, and then the team takes it through a series of “washings” in special media to remove all the seminal fluid and isolate the sperm (pretty much like it’s done for an intrauterine insemination). As the eggs are prepped, the sperm specimen is kept in an incubator until it’s time to either inseminate the eggs by conventional methods or by going a little bit more high tech. Conventional sperm insemination If your partner’s sperm is normal and your eggs are going to be fertilized in the lab with normal insemination, the next steps are as follows: The sperm are washed, and the egg is separated from the follicular fluid. It still has its cumulus, which helps to activate the sperm. For standard IVF, your eggs (up to six to eight per dish) and sperm are placed a in dish that has wells so that each egg, or at most a couple, have its own chamber. This step used to take place in a petri dish, a flat-bottomed round glass or plastic dish, which was labeled with your name, lab number, the date, and the number of eggs in the dish. This is so passé today. The dish is placed in an incubator so the eggs and sperm can be kept at body temperature. They’re kept in a nutrient solution (culture medium), which provides conditions as similar as possible to those in the body. Different labs use different culture media, and this is one way that labs differ from one another. However, today most labs purchase their media from a limited number of companies and there are only a few different types of media, so the media is standardized across the industry. Conventionally inseminated eggs are left alone for 16 to 20 hours. The day after the retrieval, embryology takes the dish out of the incubator, strips off the cumulus (which has by now been greatly loosened by the action of the sperm), and checks the eggs. What they hope to find is two pronuclear (2PN) embryos, or embryos that have two visible circles lined up next to each other. These embryos contain the genetic material from each parent. High-tech sperm injection Since the advent of intracytoplasmic sperm injection (ICSI) the use of conventional insemination has decreased significantly. A report by the CDC states that from 1996 to 2012, the use of ICSI for male factor infertility rose from 76 percent to 93 percent and for couples without male factor from 15 percent to 66 percent. Using ICSI for male factor increases the chance that the egg will fertilize. Some men with male factor have sperm that can’t penetrate the shell of the egg, and ICSI bypasses this problem. So, the use of ICSI for male factor makes sense. For couples with no male factor there is less of a need to do ICSI. The problem is that there is no test that accurately identifies the man with a normal semen analysis where his sperm can’t fertilize the egg. The couple undergoes the entre IVF process, places the sperm and eggs together, and the next day finds that none of the eggs fertilized. This is not common but extremely disappointing when it occurs. For that reason, many IVF programs have significantly increased the use of ICSI. If you’re planning to freeze some or all of your embryos for use at another time, your clinic may freeze them at the 2PN stage. Some centers grow all your embryos out to blastocyst stage and freeze only those that make it to blastocyst.