By: Lisa A. Rinehart and John S. Rinehart and Sharon Perkins and Jackie Meyers-Thompson and
Updated: 05-11-2022
From The Book: Getting Pregnant For Dummies

Getting Pregnant For Dummies 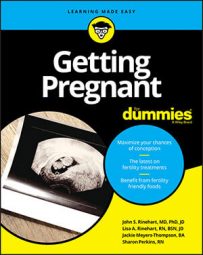 Explore Book Buy On Amazon
Women’s infertility issues can be very complex because so many different systems can be at fault. Is the problem uterine, tubal, hormonal, age-related, or ovarian? Any one of these problems can cause enough trouble to prevent you from becoming and staying pregnant.

Maybe you had an HSG to evaluate your fallopian tubes and uterus, or maybe you had a hysteroscopic surgery for an even closer look into the uterus. Looking at the uterus is an integral part of any fertility workup because the uterus nourishes and holds a baby for nine months.

Finding fibroids in the uterus

Fibroids, or benign tumors, are commonly found inside or on the outside of the uterus. They’re extremely common, with 40 percent of women between the ages of 35 and 55 having at least one. Fibroids are even more common in African-American women, with 50 percent having at least one.

Fibroids can cause bowel or bladder problems, very heavy bleeding, or pain. Fibroids can be either inside or outside the uterine cavity; their location determines whether they cause a problem with your ability to get or stay pregnant. Fibroids completely outside the uterus, such as pedunculated fibroids, which are attached to the uterus by a stem, don’t usually cause a problem with fertility. Submucosal fibroids grow through the lining of uterine wall and can cause a miscarriage.

Fibroids can be surgically removed through a process called a myomectomy. A small fibroid inside the uterus can usually be removed by hysteroscopy, a procedure in which a thin telescope is inserted into the uterus through the vagina. This is outpatient surgery and is relatively atraumatic. In contrast, large intramural fibroids require an abdominal incision and a hospital stay. You generally need to deliver by cesarean section after an abdominal myomectomy.

Polyps are small fleshy benign growths found on the surface of the endometrium. Very small polyps usually cause no problem with getting pregnant, but larger polyps or multiple polyps can interfere with conception.

Polyps can cause irregular bleeding; they can be diagnosed via sonohysterogram or hysteroscopy and can be scraped off the endometrium. Polyp removal is called polypectomy.

Clearing out the fallopian tubes

Most women have two fallopian tubes, one on each side of the uterus, next to the ovaries. Because these tubes are the transport path from the ovary to the uterus, a problem with one or both tubes can have a big impact on your baby-making ability.

How fallopian tubes should work and what can go wrong

Fallopian tubes are not just tubes. If they were, then repair would be much simpler and far more successful. Tubes actually have jobs to do: specifically, to transport and culture. The tube is where the sperm and eggs meet, and fertilization takes place. So, the tube must allow sperm to migrate through the uterus and into the tube. The tube also must pick the oocyte from the surface of the ovary when it is ovulated and move it nearer the uterus. Finally, once the fertilized egg, now called an embryo, has developed for two to three days, the tube must move the embryo into the uterus.

The inside of the tube is lined with cells that have hair-like projections that move in a wave-like fashion to transport the embryo. (Think beach ball at a football game moving around the crowd.) Infections can damage these hair-like projections and decrease or destroy the tube’s ability to perform the transport function. This is a microscopic function and therefore cannot be diagnosed.

Also, the tube acts as an incubator for the early development of the embryo. The environment in the tube, designed specifically for the embryo, is unlike anywhere else in the body. This function also cannot be seen or diagnosed.

Sometimes a tube is surgically removed after an ectopic pregnancy, a pregnancy that starts to grow in the tube rather than in the uterus. If this pregnancy is found early enough, it may be possible to dissolve the pregnancy with a chemotherapy agent called methotrexate. However, if the fetus grows large enough undetected in the tube, the tube can burst, causing life-threatening bleeding. The only way to stop the bleeding is to remove the tube.

You can get pregnant with only one tube but having one ectopic pregnancy leaves you at a higher risk to have another. Frequently, when a tube is removed, the surgeon will look at the other tube and find that it looks okay. For a person with an ectopic and one remaining tube, the pregnancy rate is estimated to be about 70 percent, of which 10 percent are another ectopic. So why don’t the other 30 percent conceive? Probably because the tube may appear normal and be open, but damage on the interior of the tube has caused it to malfunction and not be able to perform the job it needs to do. When women become pregnant after an ectopic has been removed, they usually do so within the first year. Beyond that pregnancies can occur but they are rare, and the couple may want to pursue IVF.

Women who have only the left ovary and the right fallopian tube can get pregnant because the egg can “float” to the remaining tube. Of course, this also applies to women who have the left tube and the right ovary. (One study estimated that the egg gets picked up by the opposite tube about 30 percent of the time.) Sometimes fallopian tubes are seen to be enlarged on ultrasound or during an HSG. If the tubes are very swollen and dye doesn’t flow through them, you may have a hydrosalpinx, the medical term for a tube filled with fluid. If both tubes are dilated, the condition is known as hydrosalpinges. 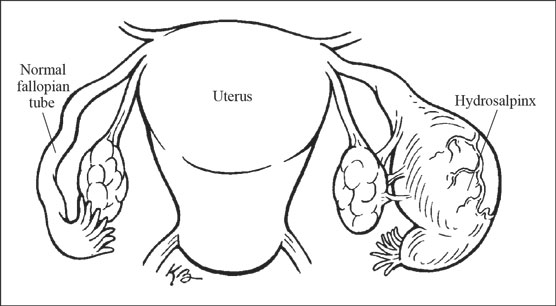 A hydrosalpinx can affect your ability to get pregnant.

A hydrosalpinx interferes with pregnancy in two ways:

The treatment for a hydrosalpinx is surgical. In mild cases, the end of the tube can be opened and the ends peeled back like a flower. Surgical repair of damaged tubes has a low chance of success primarily because surgical repair does not address the damage on the interior of the tube. However, in severe cases, the tube will not work even if it is opened. In these cases, the tube or tubes must be removed, and you need to have IVF. This diagnosis is a hard thing for many women to accept because it definitely ends any chance that they’ll be able to get pregnant on their own. However, well-done studies have demonstrated that pregnancy rates are lower for women with bilateral hydrosalpinges. Having one hydrosalpinx and one open tube still reduces the chance for a successful IVF cycle. The reason why the hydrosalpinx reduces the pregnancy rate is unknown, but theories propose that the fluid in the tube can leak into the uterus prevent implantation.

Sometimes fallopian tubes look fine on an X-ray but may be surrounded by adhesions (scarring) that prevent them from picking up the egg. Endometriosis, tissue growths found anywhere in the pelvis, can grow in or around the fallopian tubes and is a common cause of adhesions around tubes. Normal tubes can’t be visualized by ultrasound.

Because the fallopian tubes play such a large role in getting pregnant, you’ll probably need intervention, such as IVF, to get pregnant if a problem is discovered with them. Removal or absence of the tubes, or a blockage that can’t be removed, makes IVF inevitable if you’re trying to get pregnant.

For doctors who perform surgeries in this area, it's typical to see scar tissue, or adhesions (as shown), in your reproductive system. Many women having a second or third cesarean section delivery or other surgery had scar tissue throughout the pelvis that needed to be cut away before the delivery team could get to the uterus. 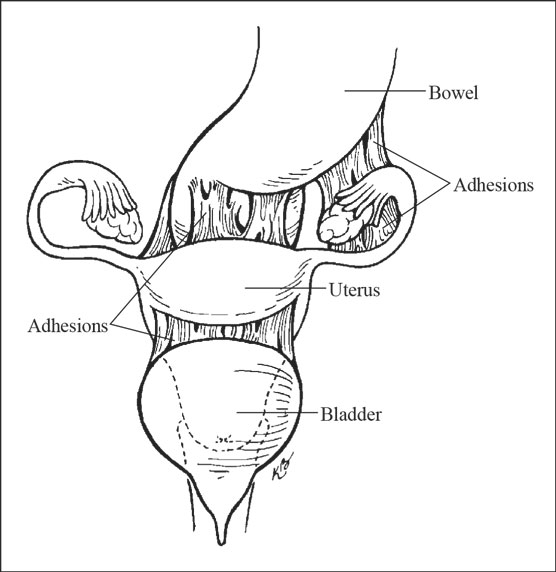 Adhesions in the female reproductive system.

Adhesions form when blood and plasma from trauma, such as surgery (like an appendectomy, tubal removal of an ectopic pregnancy or fibroid), form fibrin deposits, which are threadlike strands that can bind one organ to another. They can be removed, but surgery to correct adhesions may result in — you guessed it — more adhesions.

The amount of scarring depends upon the surgical procedure done but can occasionally be extensive. Adhesions can cause pelvic pain; cesarean sections can cause adhesions, but they tend to be anterior (or in front of) the uterus, and thus may cause difficulty during a subsequent C-section. However, C-sections don’t usually cause problems with tubes (which tend to be behind the uterus), and thus don’t usually cause infertility.

Your chances of getting pregnant after adhesion removal are highest in the first six months after surgery, before extensive adhesions form again. Some adhesions can’t be removed without damaging the tubes or ovaries, and you may need IVF to get pregnant. Since the advent of IVF, surgical repair for pelvic adhesions is uncommon.

If you have adhesions in the uterus itself, you may be diagnosed with Asherman’s syndrome, also called uterine synechiae. Asherman’s can follow a dilation and curettage (D&C), an abortion, or a uterine infection. It can be diagnosed during an HSG but is best diagnosed with a hysteroscopy, where the inside of the uterus can be visualized. Asherman’s is also suspected if you have scant or no menstrual flow or recurrent miscarriages following uterine trauma. There are varying amounts of scarring in Asherman’s syndrome. Some people have very few adhesions, and these are filmy and easy to remove. That person has a very good chance to conceive. If the mild to moderate adhesions are removed surgically, you have a good chance, probably 75 percent or better, of becoming pregnant and carrying to term. Severe adhesions may destroy nearly all the normal uterine lining, and pregnancy may not be possible. Less frequently, a person will have extensive intrauterine scarring and that person will have a very poor chance for achieving a pregnancy. A gestational surrogate may be needed in these cases.

Matthew M. F. Miller is a father and uncle. He is the author of Maybe Baby: An Infertile Love Story.

Sharon Perkins is a mother and grandmother, as well as a seasoned author and registered nurse with 25+ years’ experience providing prenatal and labor and delivery care.