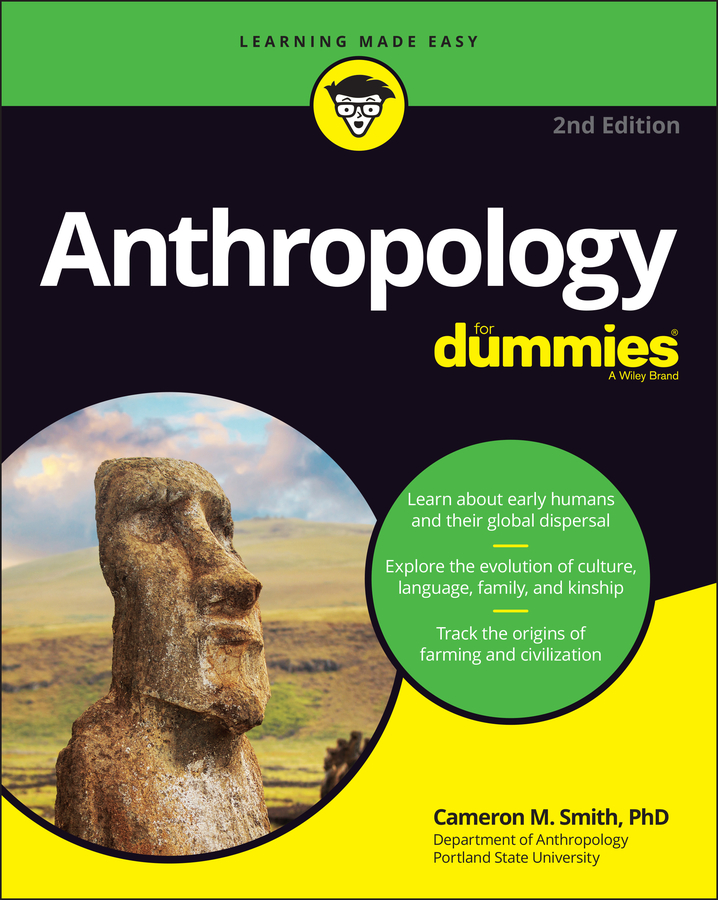 Study the science of all of us

Anthropology is the organized study of what makes humans human. It takes an objective step back to view homo sapiens as a species and ask questions like: Given our common characteristics, why aren’t all of us exactly the same? Why do people across the world have variable skin and hair color and so many inventive ways to say hello? And how can knowing the reasons behind our differences—as well as our similarities—teach us useful lessons for the future? The updated edition of Anthropology For Dummies gives you a panoramic view of the fascinating fieldwork and theory that seeks to answer these questions—and helps you view the human world through impartial, anthropological eyes.

Keeping the jargon to a minimum, Anthropology For Dummies explores the four main subdivisions of the discipline, from the adventurous Indiana Jones territory of archaeology and the hands-on biological insights provided by our physical nature to the studious book-cracking brainwork of cultural and linguistic investigation. Along the way, you’ll journey deep into our prehistory where we begin to differentiate ourselves from our primate relatives—and then fast forward into the possibilities of centuries yet to come.

Whether you’re studying anthropology for school or just want to know more about what makes us humans who we are, this is the perfect introduction to humanity’s past and present—and a clue to what we need to build a better future.

Articles From Anthropology For Dummies

Modern humans have physical and behavioral differences from ancient humans. When you're studying anthropology — specifically, modernity in humans — keep these points in mind. They highlight the most important characteristics of anatomical and behavioral human modernity: Anatomical modernity is having anatomical characteristics indistinguishable from modern, living humans. Appearing by 100,000 years ago, these characteristics include a larger brain (averaging 1,450 cubic centimeters), a larger body overall, and the presence of a chin. Behavioral modernity is behaving in ways that are indistinguishable from modern humans; it appears by 100,000 to 50,000 years ago and includes symbolism (the use of one thing to represent another thing), complex language (with complex grammar), and complex tool use (such as the use of symmetrical tools). Modern humans colonized sub-Himalayan East Asia by 80,000 BP (before present, a term archeologists use), Southeast Asia and Australia by 40,000 BP, Europe at least by 30,000 BP, the New World by 14,000 BP, and the Pacific and Arctic by 1,000 BP.

What is anthropology? The study of humanity, or anthropology, starts with the origin and evolution of humanity. Other elements key to the study of anthropology are human modernity (anatomical and behavioral); defining culture and cultural universals; how humans feed themselves (subsistence) and the influence of subsistence on social organization; and human language.

Anthropologists don't just study the evolution of human beings; they also learn about their cultures, how cultures develop, and how cultures shape human behavior. If you need to refresh your memory about culture, like what it is and how it guides human behavior, take a look at these aspects: Culture is a learned set of ideas and rules about appropriate behavior shared by a group; it's passed on from one generation to the next not by the genes but with language. Although the contents of each culture are different, each culture has specific ideas of language (a way to communicate), ethics (concepts of right and wrong), social roles (rights and responsibilities per gender and age class), the supernatural (the realm of supernatural beings), styles of bodily decoration (styles normally indicate identity), family structure (marriage customs and rules for inheritance), sexual regulation (incest taboos and marriage customs) and food preferences (ideas of what's appropriate for consumption at various social gatherings).

Language is the system humans use to communicate. Linguistic anthropology studies human language, and these points highlight humanity's distinct way of transmitting information: Human infants aren't born with language already in mind, but all healthy infants are born hard-wired to acquire any of the uniquely complex rules (grammar) of any human language. Each language has a unique grammar, a complex set of rules that tell how to properly order the words in a sentence; children normally learn the outline of this grammar by about 3 years of age.