How to Add Comments to Your MATLAB Script

People tend to forget things. You might know how your MATLAB script works on the day you create it and possibly even for a week after that. However, six months down the road, you may find that you don’t remember much about the script at all.

That’s where comments come into play. Using comments helps you to remember what a script does, why it does it in a certain way, and even why you created the script in the first place.

Anytime MATLAB encounters a percent sign (%), it treats the rest of the line as a comment. Comments are simply text that is used either to describe what is happening in a script or to comment out lines of code that you don’t want to execute.

You can comment out lines of code during the troubleshooting process to determine whether a particular line is the cause of errors in your script. Here, you can see how comments might appear in a script.

When you run this code, you see that the comments haven’t changed how the script works. MATLAB also makes comments easy to see by displaying them in green letters.

When you add a %% comment in the Editor window, MATLAB adds a section line above the comment (unless the comment appears at the top of the window), effectively dividing your code into discrete sections. To add a section comment, you type %%, a space, and the comment.

As with standard comments, the %% comment appears in green type. The line above the comment is your cue that this is a special comment. In addition, the position of the text cursor (the insertion point) selects a particular section. The selected section is highlighted in a pale yellow. Only the selected section executes when you click Run and Advance. Here’s how sections work:

You can make small changes to the code and still run a particular section.

The section comments let you easily document your script. This section provides just a brief overview of the publishing functionality, but it demonstrates just how amazing this feature really is. To start with, you really do need to create useful section comments — the kind that will make sense as part of a documentation package.

When creating the setup for the script you want to publish, you need to define the output format and a few essentials. The default format is HTML, which is just fine for this example. However, if you don’t make one small change, the output isn’t going to appear quite as you might like it to look.

On the Publish tab of the Editor window, click the down arrow under Publish and choose Edit Publishing Options. You see the Edit Configurations dialog box. 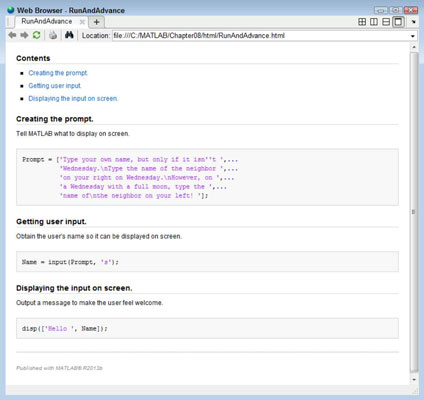 Considering the little work you put into creating the documentation, it really does look quite nice. In fact, it looks professional. When working with complex scripts, documentation like this really does serve a serious need. After you’re done admiring your work, close the HMTL page and the Edit Configurations dialog box.